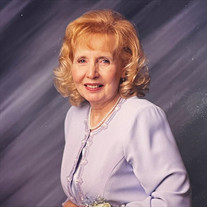 Mable Pochedly passed away in her home in Long Beach, CA on December 23rd at age 87 from dementia related illness. She lived in Garden City, NY from 1968 - 1985, where she raised 2 children, Neal Pochedly and Pamela (now Rivera), from the GCHS class of 1986. She was a loving mother and wife to Dr. Carl Pochedly, who was director of pediatric hematology/oncology at Nassau County Medical Center in East Meadow, NY, where he worked from 1963-1985. In 1991, Mable and Carl relocated to Torrance, CA, and Carl was director of pediatric hematology/oncology at King Drew Medical Center in Watts until his death in 1995. Mable was born September 19, 1934 in rural Ohio (about an hours drive southeast of Cleveland) to Ed and Elsie Philipp, both deceased, and little sister to Bessie Pemberton, also deceased. She met her future husband while still in high school, roller skating at a USO in Ravenna, OH, and got married right out of high school in 1953. Mable and Carl had many adventure-filled years together while Carl attended medical school at Case Western Reserve and then completed a stint as an army doctor at Fort Dietrich, MD, followed by a fellowship and training at Harvard and Columbia Universities, respectively. Mable was able to complete her bachelor's degree in English at Kent state and her masters degree at Hood College in MD, where she shook the hand of a campaigning JFK in 1960! Mable and Carl moved to the Garden City, NY area in 1963, when Carl took the job at NCMC. Her children were born in 1967 and 1969 and she stayed home to raise them while also helping her husband launch the American Society of Pediatric Hematology/Oncology and then the Journal of the same name which later in the 80’s became international, and won many accolades. Mable used the skills obtained from her English degree to help edit the many medical articles and publications, both in the journals and also the 31 books authored or edited by her husband on the various forms and treatments for childhood cancer. She continued to be her husband's faithful right hand editor, through family relocations to Chattanooga, TN, Austin, TX, Chicago, IL, and finally Los Angeles, CA in 1991, until Carl’s death in 1995, and stayed on as an editor for several years afterwards. Mable loved living in Southern California and developed many lasting friendships during her 25 years at New Horizons in Torrance and 5 years at Bixby Knolls Towers in Long Beach. When Mable decided to retire from the journal in the late 90’s, she spent many happy years travelling all over the world with friends and visiting her children and grandchildren often, who lived in New Hyde Park, NY and then moved back to Garden City, NY in 2014. She was always a kind and patient mother and grandmother, who abided the shenanigans of those in her charge with a firm but loving hand. She was always a joy to be with and up for any adventure. Her children and grandchildren got to spend many happy memories with her including a Bahamian Disney Cruise for her 80th birthday in 2014. There was always more joy in the house when “Grandma Mable'' came to NY for a visit. She had a peaceful, relaxing presence, always ready to lend an ear or some common sense advice, and contented with the simple pleasures in life like a good Danielle Steele book, word search puzzles and a pair of comfy slippers. She loved taking in a Broadway show during her visits to NY and accompanied the family on many road trips and amusement park excursions. Even as her dementia progressed, she remained happy-go lucky and just laughed off her forgetfulness. Those who loved her will never forget her infectious, body shaking giggle which always came out several times in conversation with her, even during the pandemic, when she was forced to spend an inordinate amount of time alone in her apartment at Bixby Knolls Towers in Long Beach, CA. In addition to her children, Neal Pochedly and Pam Pochedly (Rivera), Mable is survived by her son in law Joseph Rivera, her grandchildren Carly and Joseph Rivera, and a nephew, James Pemberton of Akron, OH. She also leaves behind many of Carl’s extended family who have stayed in touch over the years. Mable will have her cremains interred next to her beloved Carl at Green Hills Mortuary and Memorial Park in beautiful Rancho Palos Verdes, CA, a fitting seaside location for her final resting place. There will be a small committal ceremony niche-side in CA, followed by a larger memorial service being planned by the family to be held in the spring of 2022 at the Garden City Community Church in NY, where her children and grandchildren were baptized, confirmed and continue to be members.

Mable Pochedly passed away in her home in Long Beach, CA on December 23rd at age 87 from dementia related illness. She lived in Garden City, NY from 1968 - 1985, where she raised 2 children, Neal Pochedly and Pamela (now Rivera), from the GCHS... View Obituary & Service Information

The family of Mable Elizabeth Pochedly created this Life Tributes page to make it easy to share your memories.

Mable Pochedly passed away in her home in Long Beach, CA on December...

Send flowers to the Pochedly family.