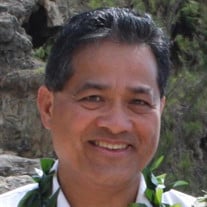 Manuel “Manny” Perfecto Salinas, age 70, entered eternal life on August 18th, 2021 at Cedars-Sinai hospital in Los Angeles with his family present. Manny was born in the town of Pozorrubio, located in the province of Pangasinan, Philippines on November 15th, 1950. He was the oldest of six children of Consuelo and Perfecto Salinas. At the age of five, his family moved to the United States, with his father joining the United States Navy. They lived in naval housing in Hawaii, Virginia and California, eventually buying a home in Carson, CA. He graduated from Carson High School, before earning his Bachelor of Science in Chemical Engineering at Long Beach State University. He started his career in the aerospace industry at Rockwell International, working on parts that would be used for the life support system in the Space Shuttle. Manny took pride in his work as an engineer, completing over 40 years of service at the Aerospace Corporation in El Segundo, CA, before retiring in 2018. His role was critical for mission success, and took part in dozens of rocket launches while at the company. Outside of work, he had many active pursuits. He enjoyed racquetball, tennis, volleyball, skiing, and completed multiple marathons. He also loved mountaineering, with ascents of Mt. Rainier, and the volcanoes Chimborazo and Cotopaxi in South America. Manny was an avid follower of the UCLA sports teams, winding down every night by checking news and scores. He married his wife Laura in January of 2008 in Kauai, Hawaii. They loved taking weekend trips to beautiful beach cities, and vacationing to their favorite timeshare in Sedona. They enjoyed their Fullerton home by watching the Disneyland fireworks, relaxing by their koi pond, and taking care of their dogs. He is survived by his wife Laura; his mother Consuelo; his sisters Annette, Gloria, and Marlene and younger brother Michael; step-daughter Vanessa and her husband Bobby; step-son Dominic; nephew Jonathan and niece Sarah, who he watched over after the loss of their parents; and grandsons Miles and Clayton. Manny was preceded in death by his father, Perfecto, and his sister Ruth. Manny's memorial service will begin at 10:00am at the Green Hills Memorial Chapel, and he will be laid to rest immediately following his service. If you're unable to join us in person, the service will be streamed live at 10:00am at the following link - https://view.oneroomstreaming.com/authorise.php?k=1629700325675006

Manuel &#8220;Manny&#8221; Perfecto Salinas, age 70, entered eternal life on August 18th, 2021 at Cedars-Sinai hospital in Los Angeles with his family present. Manny was born in the town of Pozorrubio, located in the province of Pangasinan,... View Obituary & Service Information

The family of Manuel Perfecto Salinas created this Life Tributes page to make it easy to share your memories.

Send flowers to the Salinas family.