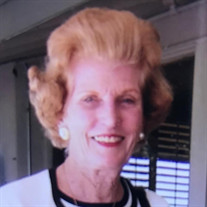 Margaret “Priscilla” Papajohn May 29, 1930 Rockland, Maine – November 24, 2020, Menifee, California Born to parents Karl Herbert Mattson and Ellen (Swanson) Mattson, immigrants from Sweden. Her parents separated in 1932, and Priscilla, her sister Ina and their mother relocated to Pasadena, California. Growing up during the Depression years, the daughter of Maid, sometimes living in the “domestics” quarters, or a dwelling the size of a single car garage, Priscilla turned to God, and the joy of Ice Skating. Her faith in God and love of Ice Skating would serve her well for a lifetime. In 1948, upon graduating from Marshall High School, Priscilla joined the famed Ice Capades. Traveling across North America, Priscilla became a bit more worldly, touring and skating with Olympic Gold Medal winner Dick Button, and headliners Donna Atwood and Bobby Specht. In 1952, the Ice Capades visited the city of Boston, Priscilla was part of a group that was cheering up the wounded Sailors at the Chelsea Naval Hospital, including her friend Johnny Pesky, “Mr. Red Sox”. It was in January of 1952, at the Naval Hospital, a recovering US Navy Sailor, UDT John Papajohn first laid his eyes upon Priscilla. John asked her to share a coffee, the next day they shared dinner, followed by John’s “initial” marriage proposal. Priscilla declined the proposal, they would court for a few years, and married on February 27th, 1954, in Pasadena, California. Priscilla and John would settle in Torrance, California, buying their first home in 1957. Priscilla taught Ice Skating and Dance in the late 50s and early 60s. Priscilla later worked for the Bank of America on and off, from 1973 until retiring in 2002. Priscilla’s love and passion were always her family, up early in the mornings, and late in the evenings, making sure the wants and needs of John, and her sons George and Chris got met. Priscilla was an exceptional Daughter, supporting her Mother to the very end, along with John. She was also the epitome of an “In-law”, her home was always open and welcoming, 8 days a week, hosting the Holidays and Birthdays, full of joy and grace. Fiercely loyal, and supportive, Priscilla had the loudest voice, cheering on her “Boys – John, George and Chris”, Priscilla’s voice was unmistakable, the opponents knew they would be in for a battle. Priscilla’s priorities in life were clear, and unwavering, Faith, Family, Community and Country. Priscilla welcomed so many into her extended family, and all that entered, knew they would be loved and supported unconditionally ( you all know who you are – and she loved you all, and I promise she is praying for us all up in Heaven ). Priscilla lived a full and blessed life, but not without many challenges that so many people face, then and now. Her hardships and joys provided her with great perspective, it enabled her to offer sound advice, but generally only when asked. She was a wise, kind, loving and patient Woman. Priscilla is survived by her son George, wife Karen and their son Alexander John (AJ), and by her son Chris, wife Sumontha, their son Johnny, and daughter Christy Priscilla. In lieu of flowers, please make contributions in memory of Priscilla Papajohn to the Salvation Army.

In lieu of flowers, please consider making a contribution in memory of Priscilla Papajohn to the Salvation Army.

Send flowers to the Papajohn family.