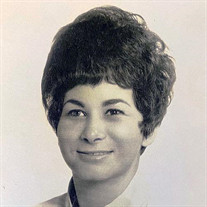 IN LOVING MEMORY MARIE FAITH PERRAKIS 1943-2021 Marie Faith Perrakis was called home to be with Jesus on Saturday, August 28. Born on February 16, 1943 in Bentleyville, Pennsylvania, Marie was the youngest child of two children. Marie and her... View Obituary & Service Information

The family of Marie Faith Perrakis created this Life Tributes page to make it easy to share your memories.

Send flowers to the Perrakis family.