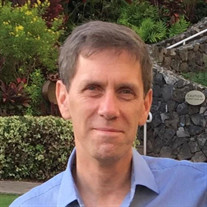 Mark David Eichelberger was born on July 21, 1962, to William and Irene Eichelberger. Mark grew up with four brothers (Jim, Dave, Steve and Paul) and two sisters (Amy and Eileen) in Cincinnati, Ohio. Upon graduation from high school, Mark enlisted in the U.S. Air Force and began traveling and living both domestically and abroad. One year into his service, he met the love of his life, Kaori, and they would spend the next 38-years together. Mark graduated from Saint Leo University with a Bachelor’s of Business Administration (Summa Cum Laude) and received so many military honors and awards, there are too many to list here. Major Eichelberger (known as “Ike” to his colleagues) retired August 1st, 2002 after a 21-year career in the Air Force. He spent another 18 years working as a civilian in the Dept. of the Air Force and graduated with a Masters Degree in Business and Organizational Security Management. Mark enjoyed traveling with Kaori, spending time with his family, enjoying a nice glass of wine, and sharing his unique sense of humor with anyone he befriended. Mark passed away on February 7th, 2022, at the age of 59, with his wife and two daughters by his side. Mark is survived by his devoted wife of 37 years, Kaori Eichelberger; daughters, Corinne Elliott of Santa Barbara, CA and Farrah Schrader of Las Vegas, NV; and grandchildren, Keira (14), Luke (6) and Logan (4). A funeral mass will be held Tuesday, March 1, 2022 2:00p, at The Chapel at Green Hills Mortuary. “Death ends a life, not a relationship. This is not the end, this is just I’ll see ya later.” – Mark

The family of Mark Eichelberger created this Life Tributes page to make it easy to share your memories.

Send flowers to the Eichelberger family.