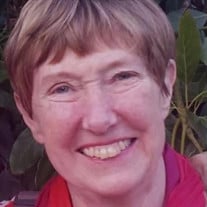 After suffering a devastating stroke, and spending several weeks in the hospital, Mary Christine Gaubatz passed away peacefully the evening of April 22, 2021. Mary Christine Gaubatz was born in Denver, Colorado, the only child of parents Annie Miller Elliott and Francis F. Elliott but grew up in Chicago. She made several life-long friends who shared her passion for baseball and all the activities Chicago had to offer. She followed in her mother’s musical footsteps, playing both the piano and flute, and at an early age learned the secret of reading company earnings reports from her father and picking a good investment. She attended Purdue University, obtaining her degree in Interior Design. It was there that Mary met William Gaubatz (“my darling Bill”), the love of her life and they were married in January 1957. Her beloved cousin Mary Anne Sanders was at her side. Mary and Bill’s first child, Margaret Lynn was born in Lafayette, Indiana, while Bill completed his PhD at Purdue University. The Air Force then moved Mary and Bill to Edwards Air Force Base, California. Here they made several life-long friends, and their second child, Karen Louise was born. After Bill left active duty, Mary and Bill spent some time in Ohio where Mary continued interior design graduate classes, and their third child, Mark Alan was born. They then enjoyed four plus years along the Niagara River in upper state New York before moving and settling permanently in Palos Verdes Estates, California in 1966. Their fourth child, son Derek Lewis was born in 1971 and completed Mary and Bill’s close-knit family. Mary’s greatest joy came from supporting her wonderful husband Bill, where she accompanied him on many business and pleasure trips around the world as well as designing and remodeling the family home several times over the years. They were faithful, inseparable companions until Bill died in 2014, relishing every moment of their 57+ years together. Mary was also a vocal soccer Mom cheering on her sons Mark and Derek and a proud supporter of all her children’s athletic, academic and musical achievements. She had many interests including opera and musicals (her children remember her playing them loudly on weekend evenings), along with lots of classical music and New Orleans jazz, attending the LA Symphony for 40+ years, swimming in her beautiful pool and constant trips to her local library fulfilling her love for reading. Her two greatest passions outside of her family, however, were baseball and travel. Despite growing up as a Chicago Cubs fan, she slowly transferred her allegiance to the Los Angeles Dodgers. She attended, avidly followed and listened to Vin Scully radio broadcasts for many games throughout her close to 55 years in California and was ecstatic when they achieved another World Series championship in 2020. Her second passion was travel, and Mary loved to plan with great detail, “surprise” trips for the family and later her grandchildren. She and Bill enjoyed many wonderful trips to countries in Europe, as well as Australia, New Zealand, Canada, Alaska, yearly trips to Hawaii, Death Valley, Gulf Hills, many other places in the U.S. and their favorite fall trip to Sequoia and Kings Canyon. Italy was undoubtedly her favorite country with multiple visits over the years, and so much so that she learned and became fluent in Italian. Family and tradition were also especially important to both Mary and Bill. They loved to host the entire family for an extended long Thanksgiving weekend, as the family continued to grow and welcome spouses and then grandchildren. As the grandchildren grew, Mary organized and planned lengthy summer trips, and she and Bill took each of their eleven grandchildren on multiple European adventure trips. Her love for exploring new places, celebrating traditions, and loving her family lives on each of her children and grandchildren. Mary is survived by three of her children and their spouses; daughter Margaret Lynn Green & son-in-law Maury Green, son-in-law George Bongiorno, son Mark Gaubatz & daughter in-law Denise Gaubatz, son Derek Gaubatz & daughter-in-law Judy and Mary’s eleven grandchildren; Sean Green, Annie Green, Emily Bongiorno, Alex Bongiorno, Jessica Gaubatz, Matthew Gaubatz, Michelle Gaubatz, Jonathan Gaubatz, Bethany Gaubatz, Jeremy Gaubatz, and Katelyn Gaubatz. Friends and family are invited to a Memorial Service celebrating and honoring Mary Gaubatz on Tuesday, May 18th @ 1:00 p.m. at Tulocay Cemetery, located at: 411 Coombsville Road, Napa, CA 94559 The service will be held outside, and masks should be worn. This will be followed by a Reception hosted by the family at: Margaret/Maury Green home: 1345 Cayetano Drive, Napa CA 94559 707-294-2181 home | 415-640-3202 mobile | [email protected] In lieu of flowers, if you would like to honor Mary, the family requests that donations be made to the American Heart Association, https://www.heart.org/

In lieu of flowers, if you would like to honor Mary, the family requests donations be made to the American Heart Association, https://www.heart.org/

After suffering a devastating stroke, and spending several weeks...

Send flowers to the Gaubatz family.