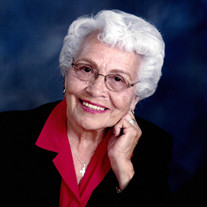 Mary began life on January 25, 1929 in a coal mining camp in Navajo, New Mexico. The daughter of Mexican immigrants, José Pérez and Soledad Haros Pérez, she was named María Pérez and was one of 7 children. In the 1940s, Mary and her family moved from New Mexico to East Los Angeles, California. In 1948, Mary wed John Green Jr (US Navy). Together, Mary and John welcomed 4 children into the world, Patrick John (1949), Juanita Mary (1952), Raymond Joseph (1960), and Arthur William (1962). They raised their children in Carson, California. Mary was a faithful and devoted wife to John for nearly 34 years until his death on February 14, 1982. Mary and John have 9 grandchildren ranging from 51-30 years of age and 16 great-grandchildren from ages 25-2 years old. In 1967, Mary enrolled her youngest child at Caroldale Avenue School in Carson and embarked upon a career as an Educational Aide at that same school. Mary worked for 45 years at Caroldale, teaching and nurturing generations of young students. To honor her years of faithful service to the community, the Mayor of Carson presented Mary with a Lifetime Achievement Award on behalf of the Los Angeles Unified School District. The most important foundation in Mary’s life was her Christian faith. She was a devoted believer, follower, and student of Jesus Christ and His teachings. Mary never used her faith to judge others which she maintained was “the Lord’s job, not mine”. Instead, following the Lord’s commandments, Mary loved God with all her heart, soul, and mind. She loved her neighbor as she loved herself and did unto others as she would have done unto her. A student of Jesus’ teachings, Mary followed the Lord’s words in Matthew 25: 31-40. She fed the hungry, gave drink to the thirsty, invited the stranger, clothed the naked, and visited the sick and imprisoned. As such, Mary’s heart, home, and kitchen were always open to anyone needing a safe space, and in doing so she touched hundreds, if not thousands of lives. At the age of 92, the Lord called His daughter home. We are confident that the first words Mary heard upon entering her eternal home were, “Well done, My good and faithful servant”. May our Mother, Grandmother, Great Grandmother, and Friend rest in the joy and peace of the Lord. We are beyond blessed to have had this indescribably selfless and faithful woman in our lives. Te amamos, Abuelita. Mil besos.

Mary began life on January 25, 1929 in a coal mining camp in Navajo, New Mexico. The daughter of Mexican immigrants, José Pérez and Soledad Haros Pérez, she was named María Pérez and was one of 7 children. In the 1940s, Mary and her family... View Obituary & Service Information

The family of Mary Green created this Life Tributes page to make it easy to share your memories.

Send flowers to the Green family.