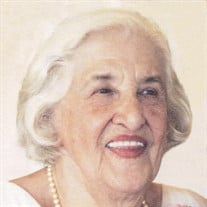 Mary J. Skouras Pappas, 92, passed away in Burbank, California on January 23, 2021 due to COVID-19 related complications. Mary was born in Providence, Rhode Island on August 1, 1928. She and her husband Nicholas J. Pappas were married in April 1950. They were together for 35 years before his passing in 1985. Mary is survived by her sister Helen Skinsacos and her children Dimitri Pappas, Mark Pappas and Joann Tippie. She has 6 grandsons and 2 great granddaughters. In Mary’s younger years she helped with her family’s restaurant business, enhanced by a four year program at Bentley University in Massachusetts that she finished in two. She had incredible culinary skills and was offered a position at the Fanny Farmer Cooking School. Sadly, she was unable to continue her education due to family obligations, but her culinary skills continued throughout her life. Mary and her husband moved to California in 1953 from Rhode Island and opened their own small diner called NAMS (Nick and Mary's) while beginning to raise a family. Mary would do all the pie baking and Nick ran the restaurant. As their children grew, Mary became a full time homemaker. She was active in her children’s lives as room parent, den leader, PTA president, or wherever volunteer help was needed. When Nick became ill, Mary went back to work as a waitress. Her customers loved her and would request to be seated in her sections. She took pride in her work and always served her customers above and beyond. Mary always said, “It doesn’t matter what you do in life, just be the best at it.” Mary spent most of her adult life in Southern California, but in 1993 moved to Las Vegas for a change of scenery. She had a lovely house near some old acquaintances and easily made new friends. Mary even dated a few times. She was always happy to host her family when they made trips to Vegas for a visit. Her grandsons had a great time with their fun YiaYia. Playing video poker and bingo at the Palace Station quickly became favorite pastimes. Travel was also a passion for Mary throughout her life. She enjoyed trips in the United States and Europe, including Greece. Her last big adventure was to the East Coast with Mark, at the young age of 89, when she went to Maine, New York City and Chicago. However, as years went on, Mary decided the place she wanted to be was near her family and moved back to California in 2003. Mary loved to sew and knit, but most of all, craft. She would always be “tinkering” (as she would say) with something at the dining room table. Christmastime was her favorite season and each year Mary would start making cards and ornaments in the late summer. Once those were finished, she would begin on new holiday decorations for the house. A true crafter, Mary used everything she could find such as wine corks, felt, beads and pasta. When she was finished, you could hear her say, “Isn’t that the craziest thing?” And then she would laugh. Her real passion was cooking. She had skills in the kitchen like no other and passed on many of those skills to her children and grandchildren. She was always just a phone call away if you had a question about a recipe or way to prepare something. For Mary, nothing could beat a family dinner with all her children present. Mark’s family enjoyed her home cooked meals most Sundays until she moved to the Burbank Belmont Village in 2019. She delighted in serving everyone and then sitting back and listening to them interact with each other. She was famous for her trays of Greek pastries, fudge and homemade preserves at Christmas. Her family can recall her making at least 30 of these special trays each holiday season to give away Mary was a people person, very outgoing and friendly. Conversation with her was easy, especially when she shared her wisdom and gave you welcomed advice; “There is a reason for everything" and "Just live and enjoy yourself”, she would say. Her most famous saying was “The good Lord willing.” Mary would say this whenever one would speak of the future. We would joke about it with her, but she stopped saying it after the beginning of the New Year. Perhaps she knew her time was coming. The service for Mary will be held on Saturday March 20, 2021 at Green Hills Mortuary in Rancho Palos Verdes. In lieu of flowers, please make a donation to a charity of your choosing in her name.

Mary J. Skouras Pappas, 92, passed away in Burbank, California on January 23, 2021 due to COVID-19 related complications. Mary was born in Providence, Rhode Island on August 1, 1928. She and her husband Nicholas J. Pappas were married in April... View Obituary & Service Information

The family of Mary Pappas created this Life Tributes page to make it easy to share your memories.

Send flowers to the Pappas family.