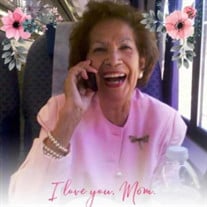 On April 25, 2022, our beautiful, beloved mother, grandmother, great grandmother, “Nana”, Mary Varela Russell, passed away peacefully after returning to her hometown of San Pedro CA. Born on February 1, 1925 to Francisco and Guadalupe Covarrubias in Kingman, Arizona she was raised along with eight brothers and sisters. She came to San Pedro in the early 1950’s after marrying Lamberto Varela. It was here their five children were born and raised. Mary the ever faithful, her strong Catholic faith guided her and her family’s lives. A devout parishioner of Mary Star of the Sea is where she taught catechism and attended weekly mass. Later life carried her on to Temecula where she became a parishioner of Catherine of Alexandria and was an active member in the Women’s Guild. Tiny yet mighty and widowed very young, Mary left a big impression in everything she did. She was fearless when it came to her work and family. Multiple jobs was never a problem if that’s what it took to raise a family. From dry cleaning to switchboard operating, to care giving, to ultimately the front desk of Shearson Lehmann in Palos Verdes. And yet, she still found time to sew clothes, serve her community as den mother, campfire leader, PTA member, and little league board member. Happily remarried and then retired, Mary followed family to Temecula in the mid 1990’s where she continued to live a full and active life which included her church, her friends, her family and many happy Happy Hours. Overall, her greatest joy and accomplishment was in raising her family and enjoying her grandchildren. Family unity was her motto and she instilled that in her family and it is evident in the way they live their lives. Mary was predeceased by both husbands, Lamberto Varela and Richard Russell as well as her son Martin Varela (Susan). She is survived by her children David Varela (Lo), Lupita Niccum (Bill), Yvonne Savage (Jim), Mike Varela (Diane) and James L. Covarrubias of Arizona and a brother Fred Covarrubias (Agnes) in Ohio, along with 15 grandchildren, 12 great grandchildren and many nieces and nephews. A Catholic Mass will be held in honor of Mary on Friday, May 13 at 10:30 a.m. at Mary Star of the Sea Catholic Church, 877 W. 7th Street, San Pedro CA 90731. Immediately following will be a Celebration of Life at DoubleTree by Hilton Hotel (Madeo Banquet Room) 2800 Via Cabrillo-Marina, San Pedro, CA.

The family of Mary Varela Russell created this Life Tributes page to make it easy to share your memories.

Send flowers to the Russell family.