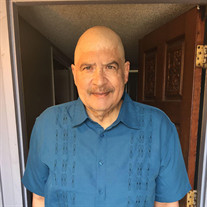 And God shall wipe away all tears from their eyes; and there shall be no more death, neither sorrow, nor crying, neither shall there be any more pain: for the former things are passed away.… Michael Anthony Boutté was born on August 21, 1952 at Queen of Angels Hospital in Los Angeles, California to the beautiful union of Luana and Albert Boutté. Michael was a happy, fun-loving, intelligent and inquisitive young child. He loved to explore and go on adventures. He attended summer camp at Big Pines through the YMCA and taught some of his friends how to swim. He was an animal lover. He loved to collect writing pens. His mother thought that he was going to grow up and become a journalist. Michael attended Saint Cecilia Catholic Elementary School where he created many friendships and formed memories that lasted a lifetime. Michael had a wonderful time attending Mount Carmel High School. A true Crusader, he was involved in various extracurricular activities. He was a member of the Annual Staff (yearbook committee), the Booster Club, where he helped to inspire enthusiasm before all sporting events, and Varsity Swimming. He was also a photographer throughout High School. “They look their last at Carmel High, Outlined against the summer sky, And armed for every fallacy, They proudly face their destiny.” After high school, Michael attended California State University Los Angeles. His first job was working for Culver City in the Engineering Department. Michael continued to stay employed in various creative positions. In the summer of 1973, Michael met the love of his life. He saw Regina and said, “Today is my 21st birthday! Please give me a kiss.” She laughed and ignored him but throughout the years they formed a friendship that quickly turned into love. In 1981, they were married at Saint Malachy’s Catholic Church and were blessed with three wonderful children: Michael, Martina and his baby girl, Candace. After overcoming a tragic house fire in Leimert Park, Michael moved his family to Carson, California where he lived for the rest of his life. Michael met many friends as he worked at different insurance agencies. He proudly became a franchise business owner at Avis in Santa Monica and was presented the Volume Achievement Award in recognition of one million dollars plus in Rent A Car Revenue. On April 7, 2014 Michael suffered a stroke. For the next seven years he continued to work tirelessly to heal. He did not let his disability define him. He would still go out to family gatherings and stay in contact with his close friends. Michael passed away on November 1st, 2021, All Saint’s Day, where the church recognizes all of those that have attained heaven. Michael’s biggest accomplishment will always be his relationship with his loving family. They meant the world to him. Michael was a dedicated and loving son, husband, father, brother, uncle and grandfather. He loved and adored his granddaughter, Desiree. They share a very special bond that will never be broken. Michael always found time for the people he deeply cared about. His love was meaningful and enduring. His love is the reason why we are all here today. Michael is preceded in death by his father Albert Boutté and his granddaughter Elyse Boutté and is survived by his mother, Luana Carter, his wife, Regina Boutté, his children, Michael Boutté, Daughter-in-law, Siannah Collado Boutté, Daughters, Martina Boutté, Candace Boutté, his granddaughter, Désirée Boutté, his sisters, Romain McCoy, Julie Boutté and a host of nieces, nephews and cousins. We pray for his mother Luana. No language can express the power and beauty of a mother’s love for her child. It is like nothing else in the world. We also pray for his children Michael, Martina, Candace and his granddaughter Désirée. “The only thing better than having you as a dad, is my children having you as a grandpa.” We especially pray for his wife Regina. This year, Michael and Regina celebrated their 40th Ruby Jubilee anniversary. In history, the ruby has been used to enhance romance, devotion and passion. The inner fire of a ruby is thought to represent the burning flame of passion in the hearts of a couple who have been together for 40 years. The love they shared is unconditional and lasts forever. “Death leaves a heartache no one can heal, but love leaves a memory that no one can steal.” We all love you Big Mike! Words of Appreciation The families of Michael Anthony Boutté would like to thank all of you for your kind words, letters and actions during our time of bereavement. Your genuine display of devotion and love for our son, husband, father, grandfather, uncle, cousin and friend have helped us through these very difficult days and will always be cherished and remembered.

And God shall wipe away all tears from their eyes; and there shall be no more death, neither sorrow, nor crying, neither shall there be any more pain: for the former things are passed away.&#8230; Michael Anthony Boutté was born on August 21,... View Obituary & Service Information

The family of Michael Anthony Boutte created this Life Tributes page to make it easy to share your memories.

And God shall wipe away all tears from their eyes; and there...

Send flowers to the Boutte family.