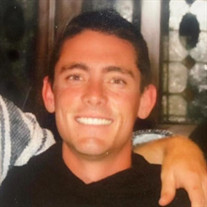 Michael Dinsmore passed away peacefully on May 28, 2021, in Long Beach, California. He was born in Bakersfield, California and grew up in Palos Verdes Estates, California. From the beginning, he always had a big heart and was extremely caring and loving by nature. He often befriended those with disabilities, helping them in a gentle and compassionate way. He had a contagious sense of humor, which kept those around him laughing. He spent much of his life caring for his pets and enjoying the wonders of nature. Over the years, he enjoyed spending time with his beloved hamsters, guinea pigs, snakes, lizards, frogs, fish, cats and his friend's dogs. He left behind some beautiful aquariums with healthy tropical fish and turtles as well as two cats with a litter of kittens. Michael had a deep connection with the outdoors, which began when he was a child. He enjoyed many wonderful trips with his family to Mammoth, Morro Bay, Santa Barbara, Catalina, and Warner Springs Ranch in San Diego County. He always looked forward to our family camping trips in the Sierra's, the desert and the Colorado River. Hiking, fishing, boating and snorkeling were his favorite activities. His lifetime dream was to live in the mountains in a small town somewhere. In Intermediate school, he started skate boarding and later became a skilled snow boarder. He played in the basketball league during high school, enjoying shooting "outside shots". He attended L.A. Harbor College where he majored in Sociology, so that he could help others recover who were suffering from chemical dependency. Michael had been struggling with drug dependency, so he admitted himself into The Beacon House in San Pedro. During his tenure there, he generously engaged in volunteer work and became a man of Faith. He successfully graduated from the program and continued to give back to the Beacon House by becoming a counselor, helping many of the men in the program get through their various addictions. Later he worked as a Case Manager at Exodus Recovery and Harbor Interfaith Services, going out on the streets to help the homeless find housing and connect with remedial programs. Our family will continue to honor and love Michael for all his positive contributions to society. We have all learned a great deal about sensitivity when dealing with those having illnesses, addictions and disabilities. He wanted to make our world just a little bit better. We miss him dearly and will always keep him in our prayers. He is now in a better place, free from any burdens that he may have been facing. He is survived by his parents, Stephen and Deborah Dinsmore, Palos Verdes Estates, California; his sister, Elizabeth Marie Dinsmore, Palos Verdes Estates, California; his sister Sara Jane Dinsmore, Hot Springs, Arkansas; his nephew, Archie Dinsmore, Hot Springs, Arkansas; and his brother, Andrew Windsor Dinsmore, West Hollywood, California. A memorial service will be held, the date and time is to be determined. In Lieu of gifts, please send donations to the Beacon House Association, 1003 S. Beacon St., San Pedro, California 90731.

Michael Dinsmore passed away peacefully on May 28, 2021, in Long Beach, California. He was born in Bakersfield, California and grew up in Palos Verdes Estates, California. From the beginning, he always had a big heart and was extremely caring... View Obituary & Service Information

Send flowers to the Dinsmore family.