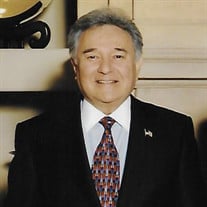 Nick Joseph Trani Obituary July 17, 1942 – November 3, 2021 Beloved husband, father, and grandfather, Nick Joseph Trani, 79 years young, peacefully went to heaven surrounded by his family on the morning of November 3, 2021, in Modesto, CA, after a battle with Parkinson’s disease. He was born in San Pedro, California, July 17, 1942 and a gift from God to parents Joseph Trani and Mary Rose Trani. He is preceded in death by his parents Joseph and Mary Rose (Di Santo) Trani, several uncles and aunts on both the Trani and Di Santo sides, who immigrated from Ischia and Abruzzo, Italy, in the early 1900’s. He is survived by his beloved wife of 57 years, Shirley (Benson) Trani, daughter Lisa Marie (LoGrande), son John Nicholas (Nicole), grandson, Andrew LoGrande (Alyssa Crisologo), granddaughters Alyssa Rose LoGrande (Carter Montgomery), Sophia and Harlow, Brother-in-laws John Benson and Larry Benson, Sister-in-laws Carol (Butler) and Margaret Benson, several nephews and nieces, as well as many cousins. He graduated San Pedro High School in the winter of 1960 and went to El Camino College, where he pursed music. In 1961, he enlisted in the Army, artillery division, and achieved 2nd Lieutenant in 1963, before being honorable discharged and joining the National Guard reserves. Nick became a Franchise Consultant for Der Wienerschnitzel working for the company for 10 years before becoming a franchisee. In 1977, he joined Carl Karcher Enterprises for nine years as Director of Purchasing. In 1986 to present both Nick and Shirley became Carl’s Jr. Franchisees in the Central Valley, California and Seattle, Washington area. While living in the Central Valley, he became involved in the RNC, the Gallo Center for the Arts, and the Modesto Opera. He was an Honorable Order of Kentucky Colonel and served on the board of California State University, Stanislaus. He will be missed by all of his family because his presence was truly a guide and an inspiration to us all. The viewing will be held at the Chapel at Green Hills Memorial Park, 27501 South Western Ave. on November 20, 2021 from 4:30 – 8:30 p.m. Funeral Services will be held in the same Chapel on November 21, 2021 from 10:00 a.m. to 11:00 a.m. Interment directly following the service.

The family of Nick Joseph Trani created this Life Tributes page to make it easy to share your memories.

Send flowers to the Trani family.