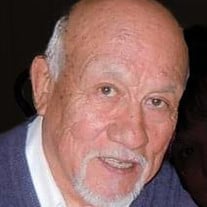 Oscar Valdez, age 95, passed away at home surrounded by his family on February 7, 2022, in San Pedro, CA. Oscar is survived by his sons Thomas Valdez (Carol), Robert Valdez (Karen), Matthew Valdez, daughters Ruth Valdez and Diane Valdez, seventeen grandchildren, twenty great-grandchildren, and one great, great grandchild. He is preceded in death by his wife of 58 years Ruth (Sias) Valdez, son David Valdez, and granddaughter Heather Valdez-Hasbrouck. Oscar was born on April 22, 1926, in San Pedro, CA, to parents Benigno and Mercedes Valdez. As a boy he grew up a few blocks away from the Los Angeles harbor that was home to the Pacific Naval fleet. He spent many days with his brother shining the shoes of the visiting sailors. In 1943, at the age of 17, he enlisted in the navy to fight in WWII. He was trained in the revolutionary new technology – radar. This was a foundation stone to his future career as an aerospace engineer. He left the navy in 1957 and worked for various aerospace companies. In 1965 he went to work for TRW where he would stay for the next 27 years. With TRW he would travel the world as a project manager and systems design engineer for satellite tracking. He would spend years in Australia, with various trips to Japan, India, China, and Christmas Island. Oscar was a great family man and a loving father. He cared deeply for others and had a servant’s heart. His life would impact many around the world. He was a social, active man who was deeply involved in the Catholic church all of his life. He was a Boy Scout troop leader at both Holy Trinity (Troop 234) and St. Peter’s (Troop 794). He also formed a Boy Scout troop while living in Australia. He taught Catechism classes, Confirmation classes and was a Eucharistic minister at Holy Trinity Catholic Church for many years. He was also very involved in the Knights of Columbus. His family and friends will always remember him as a devout man of God, patriot, and servant of his community. A visitation is scheduled for Thursday, March 10, 2022, from 4:00 p.m. to 8:00 p.m. at Green Hills Mortuary. A funeral mass will be celebrated on Friday, March 11, 2022, at 10:00 a.m. at Holy Trinity Catholic Church, followed by burial at Green Hills Cemetery. Reception to follow. All are welcome to attend and celebrate Oscar’s life.

The family of Oscar Valdez created this Life Tributes page to make it easy to share your memories.

Oscar Valdez, age 95, passed away at home surrounded by his family...

Send flowers to the Valdez family.