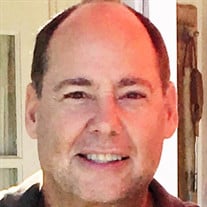 Paul Damian Tarbuck, 59, of Rancho Palos Verdes, CA, passed away May 1, 2021, at Harborview Medical Center, Seattle, WA in the arms of his wife. He went to his place of glory after a heroic 45-day battle with CoVid-19. Paul was born June 6, 1961 in Grand Rapids, Minnesota - on his Mother's birthday. He was born to George (Mike) and Betty Kay (MacFarlane) Tarbuck. He loved his family and, in particular, his Grandpa and Grandma Tarbuck who remained instrumental throughout his lifetime. He spoke lovingly of his young childhood, as well as his high school years in Proctor, Minnesota. Paul graduated from Proctor High School in 1979 and pursued his engineering interests at Brown Institute in Minneapolis, MN. He was recruited by TRW in Redondo Beach, CA out of college and began his 35-year career in the Aerospace Industry of which 33 of those years were at the Hughes Aircraft/Boeing Company. During those years, he also pursued and was awarded his Bachelor of Science degree in Business Management from Pepperdine University in Malibu, CA. Paul holds four (4) United States patents and truly loved his work. He formed his consulting company, DarkSky Consulting, after his retirement in 2016 because he felt a strong commitment to continue to contribute to national defense programs. As a lead Space System Architect, Paul helped create a sequence of technologies described by the US Government as "eye watering" for their amazing capabilities. Specifically, Paul was involved in presenting such technologies to the Vice Chairman of the Joint Chiefs of Staff (VCJCS) Admiral Winnefeld and to General John Hyten, the current VCJCS, in his former role. Paul was an integral part of Boeing Phantom Works Space because of his tenacious drive, intellect, creativity, and ability to work with others, Paul's expertise benefited many advanced technology programs, culminating in those patents and ultimately program wins for the Boeing Company. His most treasured skill, however, as reported by his colleagues, was his ability to get the best out of his teams. He was a mentor, always willing to share his experience. But wonderfully, he was not all about work. He always encouraged his colleagues to "loosen up" and get out to lunch - usually suggesting a new favorite beer. He was a lifelong outdoorsman. And looked forward to fishing opener each year. His family and friends recall him as our rock. A true man of faith, we are all left better people for having known and loved him. He loved golfing with the guys (and Beth too) ~ and fought dearly to pursue that love through chronic back pain. He loved football, especially his beloved Vikings, who never seemed to lack for ways to disappoint him. He was a hockey player and fan and we all know how he loved a spectacular car, and in particular his Corvette Grand Sport. But his favorite role in retirement, by far, was as "Grandpa T". Paul is survived by his wife, Beth (Whalon) Tarbuck of Rancho Palos Verdes, CA, his daughter, Bianca Tarbuck of Goleta, CA, granddaughters, Kayla Rundquist, of Redondo Beach, CA, and Olivia Mullen, of Goleta, CA, father George "Mike" Tarbuck, of Cohasset, MN, mother Betty (MacFarlane) Johnson (Brian) of Duluth, MN, sisters Celeste Tarbuck (Mike Loftus) of Grand Rapids, MN and Heidi Tarbuck of Corpus Christi, TX, brother Chad Johnson (Kris) of West Fargo, North Dakota, mother-in-law Mavis Whalon of Rancho Palos Verdes, CA, and sisters-in-law Lois Fisher of Torrance, CA and Janice Langis (Michael) of Springfield, OR and countless nieces, nephews and cousins. He is also survived by his beloved golden retriever, Ellie Claire. A memorial service will be held May 25, 2021, 2pm at his final resting place, Green Hills Memorial Park in Rancho Palos Verdes, CA. The service will be live-streamed on May 25th beginning at 2 pm at the following links: Pavilion: https://client.tribucast.com/tcid/5599834156 Graveside: https://client.tribucast.com/tcid/6581174892 Anyone wishing to donate in Paul's memory are asked to contribute to the Leukemia and Lymphoma Society in his name.

Paul Damian Tarbuck, 59, of Rancho Palos Verdes, CA, passed away May 1, 2021, at Harborview Medical Center, Seattle, WA in the arms of his wife. He went to his place of glory after a heroic 45-day battle with CoVid-19. Paul was born June 6,... View Obituary & Service Information

The family of Paul Tarbuck created this Life Tributes page to make it easy to share your memories.

Send flowers to the Tarbuck family.