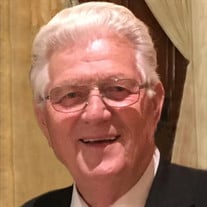 Pero Tepic, lovingly known as Dide, passed away at his San Pedro home on December 10, 2020, in the loving hands of his wife, Ruza, surrounded by his family. Pero was born on July 12, 1941, in Bijakovac, Bosanska Dubica, Bosna to Dušan and Stojka Tepic. Pero was one of six children. After tragically losing his father as a young boy, Pero quickly became the patriarch of the home for his mother and three surviving, older sisters. At the age of 14, he left home to pursue trade school to become a machinist to help support his family. He then went into the army for two years and shortly thereafter, got his first job as a machinist in Zadar, Croatia. On a chance occasion while visiting a friend in Kukljica, Croatia, he met the love of his life, Zorica (Ruza), whom he married in 1967 and would then spend the next 53 years of his life with. Shortly after getting married, Pero and Ruza moved to Paris, where they lived for a year eating baguettes and drinking wine under the stars. In 1968, they moved to San Pedro, California, where they would settle down and live for next 52 years. They had four children: Suzi, Jasna, Dusan, and Diana. Pero was a hard worker and occasionally worked two jobs at a time. He got his first job at the cannery, where he worked for one month. It didn’t take him long to begin working as a machinist and even a carpenter at times at multiple shipyards, before he ultimately spent 20 years at Todd’s Shipyard, where he became a master of his craft. After Todd’s Shipyard closed, Pero spent the next ten years working as a steam engineer at San Pedro Peninsula Hospital. Pero loved life. He had an infectious smile, contagious laugh, heart of gold, and had the ability to touch the hearts of people he just met. Pero’s presence was magnetic. He loved being around people and celebrating life. He enjoyed singing, dancing, and spending time with his family. He was a master handyman who put his talents to good use, whether it was building something new or remodeling something old. He enjoyed the outdoors, especially being around animals and nature, which reminded him of his homeland. Pero was a man of faith and had a strong love for God. He was a genuine force of unconditional love in the lives of his family and friends and made everyone feel so loved. Pero is survived by his loving wife Ruza, sister, Jeka Babić, children, Mira (Dušan) Babić, Suzi (Stan) Finka, Jasna (John) Brunac, Dusan (Christina) Tepic, and Diana (Raul) Tepic-Herrera, dear grandchildren Marijana (Alojz), Marko (Kristina), Liliana (Brendan), Danielle, Johnny, Mariana, Michael, Christina, Sara, Angalina, Timothy, Marlena, and Peter, and his great-grandchildren Aleksej, Luka, David, and Kosta, and nieces and nephews. The funeral service will be a private gathering. The family sends its heartfelt gratitude for the outpouring of support. In lieu of flowers, the family requests a donation be made to the Church of Car Konstantin i Carica Jelena, a church in Pero’s hometown in Bosna.

Pero Tepic, lovingly known as Dide, passed away at his San Pedro home on December 10, 2020, in the loving hands of his wife, Ruza, surrounded by his family. Pero was born on July 12, 1941, in Bijakovac, Bosanska Dubica, Bosna to Du&#353;an and... View Obituary & Service Information

The family of Pero Tepic created this Life Tributes page to make it easy to share your memories.

Pero Tepic, lovingly known as Dide, passed away at his San Pedro...

Send flowers to the Tepic family.