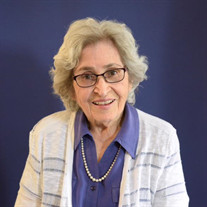 Beloved mother, and great, great, grandmother Phoebe Hernandez, 92, went home to be with our Lord on Sept. 11, 2021. She died of natural causes in the home of her daughter and caretaker, Priscilla Hernandez Hacker in Potlatch, ID, surrounded by loved ones. Her body was cremated at the Short’s Funeral Chapel in Moscow, ID. She was born on a farm in San Marcos, Texas on Feb. 28, 1929, to Nepomuceno and Maria Gonzalez and was the fourth of eight children. The Gonzalez and Hernandez families were dear friends who would gather in house churches in Imlay City, MI. It was here that Phoebe fell in love with the man of her dreams, Angel Hernandez. Following his ordination into the ministry, she married Reverend Angel Hernandez, in 1951 at Calvary Church in Port Huron, MI. They founded the Iglesia Bautista de Port Huron, where they pastored before accepting a pastorate in Scottsbluff, NE. After leaving the ministry, they raised their family of five children in Southern California, in Los Angeles and San Diego counties. They moved their family to San Pedro in 1969. In high school, she had a course of study that could not be found in a textbook. She learned responsibility and strength of character, as she was forced to drop out of Imlay High School in her junior year during her mother’s battle with cancer. The death of their mother left the family orphaned, and she was then entrusted as the Legal Guardian of her four minor siblings. Later as a young mother of five, she strove to complete her goal of earning her GED and still found time to be a Cub Scout Den Mother, sell Avon, and pack the best chicken salad sandwiches for Vacation Bible School lunches. She used her skills and talents to serve in her church, whether teaching Sunday School, directing a Christmas Play, or leading women’s groups or bible studies. The course of her life changed again as she was widowed at the young age of 40, with five children, ages 11 – 18, and again she relied on her strength of character. She has been richly blessed with a legacy of 36 descendants and a great-grandson due in mid-May. She would marvel that she was able to hold her three great, great-grandbabies. She retired from TRW, 1 Space Park, in Redondo Beach in 1998. During her career in aerospace electronics, she made a circuit board for the Apollo 11 mission which landed on the moon in 1969 and she was later nominated for the TRW “Woman of the Year Award”. After retirement, she moved to Maxwell, TX, where she kept herself busy with home remodeling projects, raising organic, pastured, chickens, traveling with her sisters and brothers to visit old family friends in Michigan and her children and grandchildren in CA, CO, and ID. She could always be found reading her Bible, crocheting, working crossword puzzles, and maintaining her fiercely competitive edge in a game of Dominos! One of her favorite quotes and life motto is from Ecclesiastes 9:10 – “Whatever your hand finds to do, do it with all your might; for there is no work or planning, or knowledge or wisdom in the grave where you are going.” Phoebe was preceded in death by her husband, Angel Hernandez, Sr; two sisters, Anne and Lily; and three brothers, Tony, Paul, and Danny. She is survived by five children, Angel (Joanne) Hernandez, II, Phoebe (Ernie) Hafersat, Julie Hernandez, Samuel Hernandez, and Priscilla (John) Hernandez Hacker; ten grandchildren, Angel (Kirsten) Hernandez III, Justin Hernandez, Ernest Hafersat III, Seth (Abby) Hafersat, Denise (Romeo)Torres, Sarah (Michael) O’Brien, Ruth Montoya, Samuel (Rachael) Hernandez Jr., Zachary (Randi) Hacker, Matthew Hacker; eight great-grandchildren, Adeline Hernandez, Amyrn Hafersat, Andrew Torres, Juliette (Victor) Calderon, Joshua O’Brien, Michael O’Brien, George Sojourner IV, Sean Hernandez, and three great-great-grandchildren; Oliver Calderon, Cassandra Calderon, and Michael Patrick O’Brien III; an elder sister, Naomi Gonzalez, and younger brother Samuel (Naomi) Gonzalez and many nieces and nephews. She will be remembered through the eyes of all her grandkids as a kind and loving gramma, with a twinkle in her eye just for them, and for her great downhome cooking and signature tamales, through the hymns she sang as she worked, and always the ceaseless prayers that she prayed for us. Come ready with special memories and stories of joy and laughter to share! Memorial Services will be held on February 28, 2022. You may send flowers to: Green Hills Chapel, 27501 S. Western Avenue, Rancho Palos Verdes, CA 90275. 2:00 p.m. She will be laid to rest together with her husband Angel Hernandez, Sr, who preceded her in death by 51 years at the Graveside Service. 3:15 p.m. A Celebration of Life reception will be held at the First Mexican Baptist Church, 1201 255th Street, Harbor City, CA 90710. 4:00 – 6:00 p.m. Phoebe's favorite colors were purple and yellow so in her honor, we'd like to encourage everyone to participate in a relaxed dress code in these colors.

Beloved mother, and great, great, grandmother Phoebe Hernandez, 92, went home to be with our Lord on Sept. 11, 2021. She died of natural causes in the home of her daughter and caretaker, Priscilla Hernandez Hacker in Potlatch, ID, surrounded... View Obituary & Service Information

The family of Phoebe Hernandez created this Life Tributes page to make it easy to share your memories.

Send flowers to the Hernandez family.