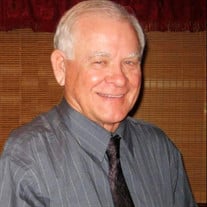 Ralph James Ishmael passed away peacefully April 20, 2022 at the age of 86. He was born July 18,1935 in Tulsa, Oklahoma to parents Ralph and Ruth Ishmael. Ralph (or "Jim" to many) graduated from Jenks High School in Jenks, Oklahoma. Soon after graduation he moved to California. He had a love for cars from a young age and California was the place to be if you were a "Motor-head" in the 1950's. Ralph graduated from National Technical School-Los Angeles and began his career in the field that he loved - automobiles. He met and married Madeline "Linn" Schmidt. Together they raised 5 daughters in Torrance, California. Ralph continued his career in the auto industry by working as a mechanic at local car dealerships, and later owned his own repair shop in Torrance. Ralph began his career with the City of Torrance as an Equipment Supervisor on December 1, 1980. In 1985, he was appointed to the City Yard Study Team, and was instrumental in the design of the City Services Facility on Madrona Avenue where the City's garage, transit, streets, water and parks operations functions are housed. Ralph continuously provided well maintained, safe, and clean vehicles and equipment to all City departments for use in providing services to the community. Through his hard work and dedication, Ralph rose up the ranks to become the Fleet Services Director in 1987. Ralph designed the Torrance Police Department SWAT van and received commendation from the Police Chief for making the "DARE" program a reality to educate and deter children from the dangers of drugs. Ralph retired in 1998 after 17 years of service. Retirement for Ralph meant choosing his next project. He built a huge garage, plenty of room for his dune buggy, RV, and automobiles. He enjoyed having family come over to visit, to have BBQs, share time, and make memories. Ralph volunteered at the California Highway Patrol and the San Bernardino County Sheriff's Department. Ralph and Linn enjoyed 53 years of marriage before her death in 2009. In 2010, Ralph met and married Lorraine Moore. They spent 11 years together entertaining family and friends before she passed in 2021. During his youth in Oklahoma, Ralph was raised Baptist. He converted to Catholicism when he married his wife, Linn, and taught catechism classes while raising their daughters. Later in life, he returned to his Baptist faith and enjoyed his relationship with Grace Point Fellowship Church in Yucaipa. Ralph was a "straight shooter" and honest man. He was a loyal, protective, loving husband, father, and grandpa. Ralph is survived by his daughters, Sherri Renon, Victoria Howe (John), Jean Hilgendorf (John), Janet Jones (Matt), Theresa Stout (Steve); his 10 grandchildren, Jamie, Christopher, Jason, James, Daniel, Derek, Julia, Carly, Steve, and Tera; his 3 great-grandchildren, Madeleine, Jesse, and James. Ralph was preceded in death by his parents, Ralph Ishmael and Ruth Causey, and his brother Johnie Ishmael. A funeral service will be held on May 3, 2022. 11:30 am, at the Green Hills Memorial Chapel, 27501 S. Western Ave., Rancho Palos Verdes, CA 90275 Burial will immediately follow at Green Hills cemetery. A reception to celebrate Ralph's life will be held immediately after the burial at Rolling Hills Covenant Church-NORTH CAMPUS. 2221 Palos Verdes Drive North, Rolling Hills Estate, CA 90274 (across the street from the main church campus). To view the Live Stream of the Funeral Service at Green Hills Memorial Chapel please click the link below: https://view.oneroomstreaming.com/authorise.php?k=1651131468181005 In lieu of flowers; Senior ministries at Grace Point Fellowship Pastor Jack Teachout 34784 Yucaipa Blvd Yucaipa, CA 92399

Ralph James Ishmael passed away peacefully April 20, 2022 at the age of 86. He was born July 18,1935 in Tulsa, Oklahoma to parents Ralph and Ruth Ishmael. Ralph (or "Jim" to many) graduated from Jenks High School in Jenks, Oklahoma. Soon after... View Obituary & Service Information

The family of Ralph Ishmael created this Life Tributes page to make it easy to share your memories.

Send flowers to the Ishmael family.