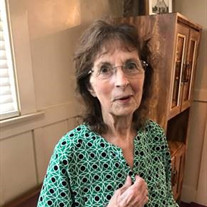 Raydonna Geraldine Spain was born in Indianapolis Indiana April 6, 1937. The only child of Ray and Elizabeth McKinsey. She moved to Los Angeles California in her 1st year of life where she was raised and attended school. She attended Bible College, traveled in a singing group and Evangelized. Raydonna married in 1955 and she leaves behind 12 children, Lorie and Larry, Randy and Mary, Tammy, Kenny, Michael and Veronica, Nancy and Sean, Darlene and Sallie, 23 grandchildren, 12 great grandchildren and 5 great-great grandchildren. Raydonna's parents were Ministers and Pastored and founded Calvary Pentecostal Church of God in San Pedro California from 1955 to 1978 when her Father passed away and requested her to assume the Pastorate at the church. She Pastored there for 35 years before retiring and moved to Arkansas with her husband Bobby Spain until his death in 2010 after which she returned to San Pedro and lived in the church parsonage until her death on Saturday March 19, 2022. Raydonna served her community most of her life in various roles in the church while working a fulltime job. She was a very talented woman who sang and was a naturally gifted musician, playing the piano, accordion, guitar, bass, cello, banjo and clarinet. She minister to her congregation, to the homeless with a food ministry, build churches and ministered for years in Mexico, traveled and drove the church bus to churches across Southern California with her choir (the Joy Singers) and Ministered with her choir in Nursing Homes. She baptized, preformed Weddings, dedicated babies and officiated funerals here in this very chapel over the last 55 years. She was a beloved Daughter, Mother, Grandmother, Pastor, Coworker and Friend. She was faithful to God in her calling and she has received her rewards in Heaven. Raydonna will be greatly missed by all the countless lives she touched. Until we meet again.

Raydonna Geraldine Spain was born in Indianapolis Indiana April 6, 1937. The only child of Ray and Elizabeth McKinsey. She moved to Los Angeles California in her 1st year of life where she was raised and attended school. She attended Bible College,... View Obituary & Service Information

The family of Raydonna Geraldine Spain created this Life Tributes page to make it easy to share your memories.

Send flowers to the Spain family.