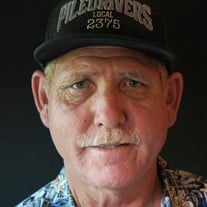 Raymond C. Mulcahy, 60, of Wilmington, California, passed away unexpectedly on January 22, 2021. He passed away peacefully with his wife and two daughters surrounding him. Ray spent his career growing to become one of the top Piledrivers of his time. During his time with Union 2375, he mentored and trained many young adults, while serving his union as the President of Local 2375, twice elected. Aside from being great at his job, Ray was an exceptional husband and father to his wife and two daughters. In his spare time, he loved going on “cruises” in the car with his family, discovering new parts of California. He adored being outdoors, always inclined for adventure, a true love for animals, his community, and most of all, his family. Ray’s most favorite question to ask was, “Are you a leader or a follower?” and there really was only one correct answer. That is how he lived his life, with leadership and the willpower to overcome any obstacle he faced. One of Raymond’s biggest accomplishments in life was being a husband and a father. He had always wanted children and considered himself the luckiest man alive to have two daughters. His children, Ashley and Allyson, always relied on him for advice, humor, and to help them through all of life’s ups and downs. Ray taught them how to truly love life, be compassionate always to others, and love unconditionally through every moment of life. Raymond is survived by his wife, Amira Mulcahy, his oldest daughter, Ashley Mulcahy Toney and husband Shawn Toney, and his youngest daughter, Allyson Mulcahy. Services will be held at Green Hills Mortuary at 10:30 am on February 26, 2021.

Raymond C. Mulcahy, 60, of Wilmington, California, passed away unexpectedly on January 22, 2021. He passed away peacefully with his wife and two daughters surrounding him. Ray spent his career growing to become one of the top Piledrivers of... View Obituary & Service Information

The family of Raymond Mulcahy created this Life Tributes page to make it easy to share your memories.

Send flowers to the Mulcahy family.