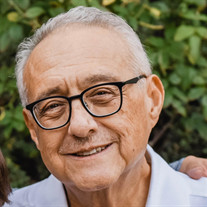 October 18, 1951 - December 16, 2020 Richard was born in San Pedro on October 18, 1951 to his parents Richard and Raquel Suarez. He grew up in Wilmington and went to Holy Family Elementary School. He attended Fermin Lasuen Catholic High School in San Pedro where he played Football, ran Track and played Baseball. His senior year of High School he met the love of his life, Julie (Hooker). After high school he attended Cal State University Long Beach where he earned his Bachelor's Degree in Accounting, and subsequently earned his CPA license in 1978. Richard and Julie married on October 23, 1971 in San Pedro where they raised their three sons; David, Jeffrey and Brian. In 1974, Richard started his professional career at Pettie, Stiritz & Ward in Torrance. From there he went to Brigante & Johnson Accountancy Corporation. In 1985, Richard became a partner at Brigante, Suarez & Raimondo and later BDO Seidman. In 1991, he started his own firm, Suarez Accountancy Corporation, where his sons Jeffrey and Brian would join him. He was a member of the American Institute of Certified Public Accountants, and The California Society of Certified Public Accountants. His passion was his family. He loved to have backyard family BBQs where he made sure everyone was included. He also loved to coach and travel to soccer, hockey and baseball games that his children participated in. He felt his life was truly complete with the arrival of his grandchildren. Once again he traveled to football, jiu jitsu, soccer, and dance classes, and made it his priority to never miss their games, practices and school events. Richard was a season ticket holder for UCLA football and a 30 year Season ticket holder for the Los Angeles Kings, where he was lucky enough to watch them win two Stanley Cups. Richard loved to go wine tasting in Napa and Paso Robles. He wanted to try the menu at every new restaurant. He learned to relax by golfing with his family and friends and was a member of the San Pedro Golf Club. He is survived by his loving wife, Julie; sons: David (Megan), Jeffrey (Vanessa) and Brian (Rejane); grandchildren: Zachary, Christopher, Milo, Ella and Nora. He is also survived by his mother, Raquel; brother, Larry; and many nieces and nephews. He is preceded in death by his father, Richard; brother, Michael; and sisters Joanne, Suzie and Patricia. Visitation will be held on Wednesday, December 30th from 4:30 pm to 8:30 pm and Graveside Service will be held on Thursday, December 31st at 10:00 am at Green Hills Memorial Park in Rancho Palos Verdes. (310) 831-0311

October 18, 1951 - December 16, 2020 Richard was born in San Pedro on October 18, 1951 to his parents Richard and Raquel Suarez. He grew up in Wilmington and went to Holy Family Elementary School. He attended Fermin Lasuen Catholic High School... View Obituary & Service Information

The family of Richard Suarez Jr. created this Life Tributes page to make it easy to share your memories.

Send flowers to the Suarez family.