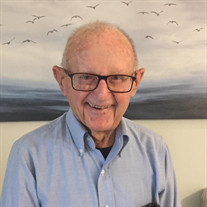 On Monday, October 26, 2020, Robert Sluga passed away unexpectedly at the age of 91 at his residence in Lake Worth, FL. Robert was born on October 9, 1929 at the family farm on Dog Run, which is now Caldwell Lake, to Gasper and Filipina Kovacec Sluga. He graduated from Belle Valley High School and received a degree in Petroleum Engineering from The Ohio State University in 1953. After a few years working in the oil fields of West Texas he accepted a position with the Iranian Oil Exploration and Producing Company in Agha Jari, Iran. During his first year in Iran he met Lois Lanning, who was a teacher in the American school there; they enjoyed over 55 years together after their marriage in 1958. Robert spent most of his working life in the oil fields of the Middle East to include Libya, Iran, Algeria and Saudi Arabia. He retired in 1989 from Aramco as a drilling superintendent in Saudi Arabia. In retirement they lived in Austin Texas and in recent years after Lois’s death Robert lived in Florida near his niece Jane Barber. Robert had an outgoing and pleasant personality coupled with a great sense of humor and always looked for the best in any situation. He and his wife enjoyed travel and learning about any place they found themselves. As a result Robert had many stories and experiences which he shared in letters and conversation that were interesting to say the least. Robert was the youngest in a family of eight children raised by a mother who valued higher education and hard work. His ability to recount family happenings and history was valued by his large extended family. Robert always looked forward to the annual Belle Valley reunions and attended for many years, never losing sight of where he grew up and his boyhood friends. He was generous in supporting and assisting family members as they progressed in life and found happiness in their numerous achievements. Robert was a wonderful uncle and man who was loved by his entire extended family. Robert was preceded in death by his parents, Gasper and Filipina Sluga and his wife Lois. He was predeceased by his brothers Henry, Edward, Herman, Emil and Walter Sluga and his sister Zora Barber. Robert was also predeceased by his nephews Terence Sluga and Conde Sluga as well as niece Tanya Seemann. He is survived by his brother Leonard of Naples, FL. Robert is also survived by nephews Thomas Sluga of Arizona, Walter Sluga of Florida, Dale Barber of New York, Jeffrey Barber of New York, Robert Sluga of Oregon and John Sluga of Oregon, Surviving nieces are Marcella Sluga of Colorado, Candy Martin of Louisiana, Diana Freel of Oregon, Jane Barber of Florida and Katie Page of Nebraska. He is also survived by many great and great-great nieces and nephews. Also surviving is a step son, Gary Gongwer of California and two nieces Judy David of Illinois and Bonnie Hansen of Illinois on his wife’s side.

On Monday, October 26, 2020, Robert Sluga passed away unexpectedly at the age of 91 at his residence in Lake Worth, FL. Robert was born on October 9, 1929 at the family farm on Dog Run, which is now Caldwell Lake, to Gasper and Filipina Kovacec... View Obituary & Service Information

The family of Robert Sluga created this Life Tributes page to make it easy to share your memories.

Send flowers to the Sluga family.