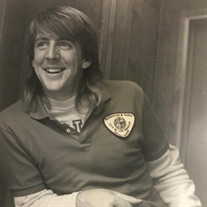 Roy “Todd” Gaydowski It is with great sadness that we announce the sudden passing of Roy “Todd” Gaydowski, age 54, loving husband, father, and son, on April 12, 2022. He is survived by his wife of thirty years, Elizabeth; son Nicholas; daughters Amanda and Samantha; and his mother, Linda Ledger. His father, Richard Gaydowski, passed away in 2018. Todd was born at San Luis Obispo Hospital and later lived in Santa Monica, San Juan Capistrano and San Pedro. He was an Eagle Scout and later graduated from UCLA in 1991 with a bachelor’s degree in History. He married Elizabeth Quinton soon after graduation; together they created an active, loving family with their three children. A lifelong resident of California, Todd spent the majority of his career working within both City and County offices for Los Angeles, including Recreation and Parks and the Elections Division. Most recently he distinguished himself as Head of the Records Management Division at the City Clerk’s Office, where he oversaw the LA City Records Center and City Archives. His accomplishments and accolades throughout his career are too numerous to list here. He was also considered a great boss and helpful colleague, always willing to go beyond the call of duty. Outside of the office, Todd was a dedicated member and most recent captain of the Los Angeles Harbor Dragon Boat Club. He was president of the Los Angeles City Historical Society. Todd was an avid reader and sudoku player. He loved exercise and the outdoors, including hiking, cycling, dragon boating, and more. He was known for his quiet demeanor and willingness to lend a hand to anyone who asked. His dad jokes were legendary in his household and beyond. In lieu of flowers, the family requests donations be made to the following organizations: The Los Angeles City Historical Society at LAcityhistory.org/donate; or the Los Angeles Harbor Dragon Boat Club, checks can be made out to LA Harbor Dragon Boat Club, c/o Bernice Baird Browning, 765 West 26th Street #605, San Pedro, CA 90731. ------

The family of Roy Todd Gaydowski created this Life Tributes page to make it easy to share your memories.

It is with great sadness that we announce...

Send flowers to the Gaydowski family.