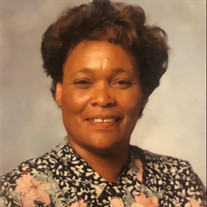 Rubie Elizabeth McClure was born to her Christian parents Chesley and Lena Bryant February 1, 1941 in Mt. Juliet, Tennessee. She attended and graduated public school system in Wilson County and Lebanon, Tennessee. After graduating high school in 1959, she attended Tennessee State University for two years prior to meeting her husband Richard McClure. They were married on April 19, 1961. Their marriage produced a daughter, Valerie (Alban) Williams and a son, Sidney McClure. They also have five grandchildren, Autumn, Marsalles, Leland, Izaac, Brijana, three great grandchildren, Ethan, Charlie Anne and Chase. Rubie loved education and she received both, her Bachelor of Arts Degree in 1974 and her Masters of Arts Degree in 1977 from the University of Redlands. She was a teacher at all grade levels including pre-school, elementary, middle and high school before retiring as a counselor at Milliken High School (Long Beach Unified School District) in 2005. Throughout her career, Rubie loved to travel, take cruises and even vacationed in several parts of the world. One of Rubie’s greatest gifts was her constant and non-judgmental love for her family. Another gift was her discipleship and the many friends and family who came to know the Holy Spirit through knowing Rubie. She was ‘like a Mom’ to countless friends of her two children and cooked for anyone who visited their home. Rubie spent many hours on the sideline of a ball field where she cheered at hundreds of her children’s games and even her grandchildren’s games. Rubie was proceeded in death by her parents and four siblings, Lillie, James, Kathleen and Gertrude. She will be profoundly missed by a multitude of extended family members, friends, her church family at San Pedro Peninsula Church of the Nazarene, and many friends and relatives in Mt. Juliet, Hermitage, and Nashville Tennessee. Her family will miss her big presence in their lives but rejoices knowing she is in peace and resting as the good faithful servant she was. She was well loved by all that knew her. The family wishes to send a special thanks to the Brown family of Vallejo and Chula Vista, California and Sydney Australia. https://view.oneroomstreaming.com/authorise.php?k=1648694246175716 Event ID: Greenhills Password: L6F78L

The family of Rubie Elizabeth McClure created this Life Tributes page to make it easy to share your memories.

Rubie Elizabeth McClure was born to her Christian parents Chesley...

Send flowers to the McClure family.