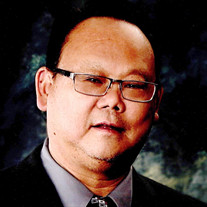 Ryan Sunahara, resident of Lomita, CA, passed away on October 23, 2021, at the age of 56, after complications associated with End Stage Renal Disease and diabetes. Ryan was born on September 6, 1965, to Charles and Marilyn Sunahara, in Los Angeles, the youngest of three children. He grew up in Gardena, where he attended elementary school through high school. He graduated from Gardena High School in 1983 where he was active in Key Club, tirelessly serving his community, served as president during his senior year, and developed lifelong friendships. While attending classes at El Camino College, he worked in the produce department at Spot Market, where he would eventually meet his future wife, Janice Yanohira, and later, worked security at the Los Angeles Air Force Base. Ryan went on to attend Cal State University Dominguez Hills majoring in Liberal Studies but decided to follow in the footsteps of his sister to work in the field of Occupational Therapy. He eventually graduated from Mount St. Mary’s College in Los Angeles with a degree in Occupational Therapy Assistant. After graduation, Ryan worked in numerous hospitals and care centers across Southern California helping adults regain functional skills to be as independent as possible in their daily lives. He eventually settled into working in the South Bay/Torrance area where he would work for the last 15 years until March of 2020. Ryan loved his job and was known to donate shoes and clothing to patients in need and would often visit former patients after discharge to see how they were doing. In 2002, Ryan and Janice wed and settled down in Lomita, CA, going on to have two children, Drew and Keira. He enjoyed planning family trips, going to casinos in Las Vegas and California, and watching his children playing the various sports they were involved in. Ryan was preceded in death by his father and mother. He is survived by his wife, Janice Sunahara, his brother Jeffrey (Wendy) Sunahara, sister Stephanie Sunahara, his children Drew and Keira Sunahara, nieces Shae and Charlize Sunahara, and many uncles, aunties, and cousins. His memory will forever be cherished in their hearts. Services will be held at Gardena Valley Baptist Church on November 18 at 1:00 p.m. Interment to follow at Green Hills Memorial Park.

Ryan Sunahara, resident of Lomita, CA, passed away on October 23, 2021, at the age of 56, after complications associated with End Stage Renal Disease and diabetes. Ryan was born on September 6, 1965, to Charles and Marilyn Sunahara, in Los... View Obituary & Service Information

The family of Ryan Sunahara created this Life Tributes page to make it easy to share your memories.

Ryan Sunahara, resident of Lomita, CA, passed away on October...

Send flowers to the Sunahara family.