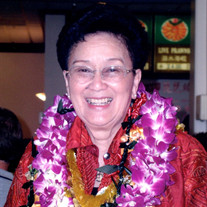 Setsue Hashimoto Iinuma left us on Saturday, June 19, 2021 at her home in Torrance, California. She was born Setsue Hashimoto, in Waimea, on the Hawaiian island of Kauai, on September 23, 1930 to Tokichi and Yumi (Kuribe) Hashimoto. She attended Waimea Elementary School, Waimea High School, and later, the University of Hawaiʻi at Mānoa. She was the only child in their family to pursue higher education. While attending the University of Hawai’i, Setsue walked everywhere. Her future husband, Takashi, also a university student, gave her rides to and from school. So, in a sense, he literally picked her up. At the time, her highest priority was to pay for her education. In order to do so, she worked as a house helper for a family nearby. Setsue graduated in 1952 with a bachelor’s degree in Home Economics, and after graduation, she attended the University of Hawaii for a fifth year to obtain her teaching credential for kindergarten to third grade. On June 12, 1954, college sweethearts Setsue and Takashi were married (apparently, the picking-up thing worked). Setsue taught kindergarten for 38 years. The first three, including her internship, were in Hawai’i at Helemano Elementary School and ʻAiea Elementary School. In search of better jobs, she and Takashi moved to California in 1956. Setsue taught kindergarten for 35 years at 186th Street Elementary School in Gardena, California, part of the Los Angeles Unified School District. If we did the math correctly, she taught over 1,000 students in the course of her career, from which she retired in 1991. We can’t count the number of people who’ve said to us, “I had your mom in kindergarten!” Setsue worked tirelessly with very little time off. However, she dedicated time to raise two sons; Brian, born in 1957, and Alan, born in 1962. She consistently encouraged us by saying, “Just do your best.” She recognized the value of education and made sure that we had the opportunity to go to college. And being a Home Economics major, she made darn sure that we never went hungry. To our surprise, we learned that Setsue was the youngest of 11 siblings (wow). There was a span of 20 years between Setsue and her eldest sibling. She is predeceased by six brothers, Charles Shigeichi, Henry Isami, Torao, Keiji, Seiroku and Junichi Hashimoto, and four sisters, Haruko Hashimoto, Miyoko Honke, Otome Hashimoto, and Yaeno Nishikawa. Setsue was a warm, caring, and generous soul. During the pandemic, she made it a point to check on her neighbors to make sure that they were OK. At family potlucks, she was famous for her delicious marinated spareribs, kamado chicken, and pumpkin pie. She volunteered at the Gardena Valley JCI working many hours making somen salad for its fund-raising events. Setsue was a “no humbug” sort of person. In other words, she didn’t want to cause anyone any trouble. Setsue loved to travel, which included taking cruises to Alaska and the Caribbean. She and her husband enjoyed multiple trips to China and Japan. Setsue also loved arts and crafts. She particularly enjoyed sewing, knitting, bunka (punch embroidery), origami (paper folding) and beadwork. Her crowning achievement was to make Hello Kitty figures with red, white, and black beads and a bit of fishing line. Above all, Setsue was a fanatic about Korean dramas. Initially watching them on DVD, in 2018, she received her certificate of proficiency in streaming Korean dramas using the Viki app on a Roku device attached to her Sony smart television. She is survived by her loving husband of 67 years, Takashi, sons, Brian (Michele) Iinuma and Alan (Lori) Iinuma, three grandchildren, Daniel and Michael Iinuma and Kelli Mamiya and nieces and nephews. She considered raising her two sons her greatest accomplishment (nicely done Mom :-)). Setsue will be remembered as friendly to others, a giving and caring person, and one who always showed her appreciation. Her passing is a great loss. We will miss her dearly. ### Private services were held at Green Hills Memorial Park in Rancho Palos Verdes, California on July 15, 2021. In a handwritten note penned shortly before her passing, Setsue wrote, “No funeral is necessary” and “No koden”. (OK Mom, we get it. No humbug.)

Setsue Hashimoto Iinuma left us on Saturday, June 19, 2021 at her home in Torrance, California. She was born Setsue Hashimoto, in Waimea, on the Hawaiian island of Kauai, on September 23, 1930 to Tokichi and Yumi (Kuribe) Hashimoto. She attended... View Obituary & Service Information

The family of Setsue Iinuma created this Life Tributes page to make it easy to share your memories.

Send flowers to the Iinuma family.