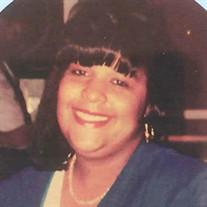 Shanda was born January 15, 1972, in Chicago, I'll., during one of the coldest days of Winter. She was the baby girl of Milton (who proceeded her in death last year) and Brenda Crum. Shanda attended Our Lady of Victory Catholic Church throughout her school years and after graduating from Carson High School, she went on to take college courses at El Camino Junior College. In May 2006, Shanda moved to Las Vegas, Nevada and began attending St. James Catholic Church, while preparing for a position she was offered as a buyer for a major clothing company. Las Vegas is where she resided until her death. Throughout Shanda's career, she went on to work at various companies, as a Trainer and Customer Care Representative. She was later offered a position at Anthem Blue Cross Blue Shield, where she worked until her demise. Anyone who knew Shanda, knows she had a very special way of dealing with people. She was definitely someone who spoke her mind and when she realized she was wrong, not when you told her, her favorite saying was "Oop, I got my nerve", then she would crack up laughing and as far as she was concerned, everything was good! Shanda had a special love for her niece, nephews, tennis shoes and Social Media. This is how she stayed in contact with many of our family members and friends. She would send us funny memes and content on a daily basis, just so we could share in the laughter and foolishness. The memories that we have of Shanda, will last us a lifetime. She was definitely one of a kind and if you made her mad, she would definitely let know "you will get yo back dirty!" Shanda leaves to cherish her memories, her mother Brenda Crum, sister Shantel Uesse) Hill, her nephews James & Branden Johnson and her niece Wynter Hill, who she affectionately called Wynnie Pooh or Bugaboo. Her Uncles, John (Ona) Crum, Detroit, Mi., Bill (Geraldine) Crum & George (Alice) Crum of Carson, Ca. Nathan (Lois) Oliver, Chicago, I'll., and Clifton (Valerie) Bell, of Jackson, La., Albert Bell, Belle Rose, La. Aunts Audrey Williams, Belle Rose, La., Mattie Gulley, Dorothy (Johnny) Millhouse, Dora Gary and Clemenceau Caldwell, all of Chicago, Ill, Eunice Crum, Selma, Ala., and Patricia (Leo) Brooks, Paincourtville, La., who is also her Godmother. And her Godson Kevin Hoskins Jr. Her Las Vegas family that she loved dearly, Mr. and Mrs. Eddie & Earline Smith and Mrs. Jennifer Thompson. Her besties Tracy Coulter and Corey Henry and a host of cousins and friends.

Shanda was born January 15, 1972, in Chicago, I'll., during one of the coldest days of Winter. She was the baby girl of Milton (who proceeded her in death last year) and Brenda Crum. Shanda attended Our Lady of Victory Catholic Church throughout her... View Obituary & Service Information

The family of Shanda Renie Crum created this Life Tributes page to make it easy to share your memories.

Send flowers to the Crum family.