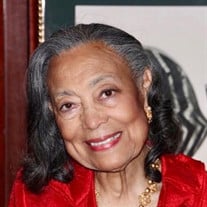 On Monday, July 30th 1934 in Birmingham, Alabama, God blessed Ollie Belle Ushry Veale and Robert Andrew Veale, Sr. with a beautiful daughter. They named her Shirley Annette Veale. The first of fourteen children, Shirley happily embraced her responsibilities as big sister and role model to Robert, Muriel Patricia, Lillie, Emily, Frankie, Ronald, Ouida, Deborah, Angela, Talmadge, Russell, Jerry and Valencia. She loved her big family and looked after her siblings as if they were her own. Shirley attended A. H. Parker High School in Birmingham, Alabama where she excelled in English and science. She was a gifted writer and worked as editor of the school yearbook. She was an accomplished speaker and member of the oratorical team, winning many competitions and proudly represented her school in the art of public speaking. At Parker, Shirley shared a close bond and many good times with best friends Gloria, Audrey, Oranetta and Celestine. Following in her grandmother’s footsteps, Shirley became an excellent pianist and served her church playing praise and worship hymns on Sundays. After graduating high school, Shirley attended Miles College in Fairfield, Alabama where she majored in biology. She became a member of Rho Nu Tau Sorority. Eager to expand her musical experience, she joined the Miles College marching band as a clarinetist. It was there that she met the love of her life, Clack Jerald. They became friends and dated throughout college. The two married in 1955. It was the beginning of a loving and devoted 65 year marriage. Shirley began her teaching career at Tuggle Elementary School, Birmingham, Alabama. Clack was drafted into the Navy. Shortly upon his return, the couple, along with their first-born son Michael Wayne Jerald, moved to Southern California seeking greater opportunities and paving the way for many of her siblings to follow. Shirley and Clack built a new life for themselves, setting down roots and welcoming two more children, Michele Annette and Robert Veale. A passionate educator, Shirley taught biology at Jefferson High School, Los Angeles, California, where she was appointed head of the biology department. Furthering her education, she earned a Masters of Education at the University of Southern California (USC). Shirley worked as an academic counselor at Bethune Junior High School, Los Angeles. She served as Assistant Principal at Locke High School in Los Angeles and Nobel Junior High School, Northridge, California where she worked until retirement. Shirley was a faithful, devoted woman of God and a committed member of Crenshaw Christian Center, Los Angeles, California. Feeling a call to expand her biblical knowledge, she completed a seven-year in-depth course of study with Bible Study Fellowship, International (BSF). Her journey through the Bible and sharing the Word with others brought her such immense joy that upon completing the BSF program, she became an instructor. Shirley was the family matriarch, known for her strength and wisdom – her younger siblings often sought her advice. She was a prayer warrior, blessed with a powerful gift of discernment and lived her life humbling herself before God and being led by the Holy Spirit. Shirley enjoyed reading, traveling, relaxing at home and had a deep appreciation for all things beautiful. More than anything she valued spending time with her husband and family. She loved with her whole heart and would do anything for her grandchildren. They were the flowers in her garden of life. Shirley departed this life on December 26, 2020. Her memory will be celebrated and cherished by her husband of 65 years, Clack Jerald, her three children Michael W. Jerald (Ora), Michele Jerald Ford (Michael), and Robert V. Jerald (Tuyet); grandchildren Angela Jerald, Victor Jerald, Joshua Jerald, Josiah Jerald, Jonathan Ford, Rachel Ford, Joseph Ford, Diella Jerald and Micaiah Jerald; three brothers, Robert A. Veale, Jr. (Eredean), Russell Veale (Kerrey) and Jerry Veale; five sisters, Lillie Wilson (Frank), Emily Ford (Julius), Ouida Belcher, Angela Joubert (Cedric) and Valencia Johnson, as well as many nieces, nephews and close friends. She was preceded in death by her mother and father, sisters Muriel Patricia Veale, Frankie Veale Taylor and Deborah Veale Beale, brothers Ronald Veale and Talmadge Veale, Esq. and grandson Justin Ford.

The family of Shirley Veale Jerald created this Life Tributes page to make it easy to share your memories.

Send flowers to the Jerald family.