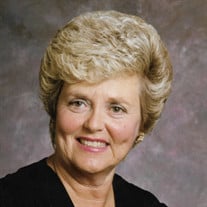 Shirley Ann Simmons of Centennial Colorado was born to parents Michael and Mildred on March 29th, 1932 in Eagle Rock, California. She passed away peacefully at Leawood Assisted Living on July 6th, 2021. Following her graduation from South Gate High School in winter of 1951, Shirley married Howard Voien Jr that fall. The couple moved to Torrance, California where they lived near Howard’s parents and then later moved to Lomita, California. In 1955, they had their one and only child, Howard Voien III. Shirley became a single Mom when her son was three. After being a single Mom for a number of years, she married Kermit Simmons in 1965, but that marriage also ended in divorce. Later Shirley dated Mac Vicari for close to twelve years, she cared deeply for Mac; these were some of the happiest times of her life. Shirley provided for her son by working in the Aerospace Industry. Over approximately three decades she worked for several Aerospace companies. Her longest tenure being with Hughes Aircraft in Torrance, California where she worked in Document Control for 20 years. Shirley retired from Hughes Aircraft when she was 58 years old. When Shirley was 46 years old her granddaughter Bianca Nycole Voien entered her life! From that point on, until Nycole was married, she and her son Howard raised Nycole. Shirley’s granddaughter was the daughter she never had and brought her great joy. Shirley, Howard and Nycole moved from Torrance to Mission Viejo, California in 1991. Shirley would often say that the home in Mission Viejo was the favorite place she ever lived. During that time Shirley not only raised Nycole, but also babysat for many of the families at Mission Lutheran Church. Shirley got great joy from the kids she babysat, often referring to them as family. Following the marriages of Nycole to Chris Bennecke in 2002 and Howard to Candis Lynn Johnson in 2003, Shirley moved to Laguna Woods, California. Shirley lived alone there until she moved to Colorado in 2015 to be closer to family. Shirley is survived by her son Howard, and his wife Candis; her granddaughter Nycole, and her husband Chris; and three beautiful great granddaughters – Kelsey Ann, Hayley Nycole and Payton Grace. Shirley was hard working, had a cute sense of humor and loved her family dearly. She will be greatly missed. Services celebrating her life with be held at Green Hills Mortuary in San Pedro, California.

The family of Shirley Ann Simmons created this Life Tributes page to make it easy to share your memories.

Shirley Ann Simmons of Centennial Colorado was born to parents...

Send flowers to the Simmons family.