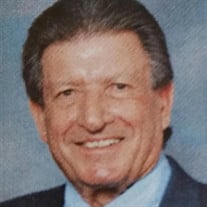 Stanley Crabtree, 84, passed away peacefully at home, early the morning of November 26th, 2020. Raised by Paul and Helen Blanton in Wilmington, CA. he graduated from Banning High School in 1954. He went right to work for American Can Company where he had a long career that lasted over 30 years. He married Shirley Gilliland, had two daughters and moved to San Pedro in 1967. They raised their family and stayed busy traveling, throwing pool parties, hitting car shows with best friends Pat and Adele Scognamillo and begrudgingly ferrying his daughters around to all their activities. When Shirley surprised him with a boat, they named it "The Mad Crab" and trips to Catalina were added to the good times. Stan was a "car guy" from beginning and had a long line of vehicles that he jokingly referred to as his other children. The neighbors often wondered how many cars one family needed. Through the years Pantera, Stagg, and even a Harley made it in to his rotation but Stan always returned to his favorites, Jags and Corvettes. He eventually transitioned from working on cars to selling them at Bay Buick in Torrance, where he won numerous Salesman of the Month award. Stan had a few favorite things and was a loyal friend but the most important thing to him was family. Many of his closest friendships were with his brothers and sisters in-law. Billy & Nancy Gililland, Don & Sharon Gililland, Patsy & Bill Franklin, Jan & Bob Schillinger, Dick and Joan Gililland, Jerry and Julie Gililland and Sharon Stuart. Whether going on trips, golfing or visiting Arkansas a good time was had by all whenever they were together. Stan's daughters brought more then grief to his life. Besides their many friends, who he always enjoyed and who he gave special nicknames, they also gave him three grandchildren who he was so proud of. He loved jazz especially Latin but to the kids it will always be called "Papa Music". His annual tree trimming party was spent watching them fill his Christmas tree with his collection of Grinch and Crab ornaments. He would always thank them for a job well done with a "now that's a good looking tree!". The girls also brought him "sons" and he bragged that he had the two best son-in-laws anyone could ask for. Stan was a guy's guy and loved hanging out with John and Dave. In his later years he worked with Dave at All Access, Inc. He also looked forward to his bi-annual trips to Laughlin with John and "the boys". He was a man of few words but was always willing to listen and often would share surprisingly pointed advice and pearls of wisdom with many of John and Dave's friends who became his dear friends as well. He was preceded in death by his brother Don Crabtree and sisters Helen Blanton, Faye Brooks and Margie Moore, brothers-in-law Jerry and Richard Gililliand and nephew Dennis Gililland. He leaves behind his daughters Kimberli and Tonya and their mother Shirley Crabtree as well as his sons-in-law John Gabbriellini and David Agar. He is also survived by the grandchildren he adored, Jillian (Zachary) Longley, Chelsi Gabbriellini and Skyler Agar and his great-grandaughter, Jordan Renee, as well as many nieces and nephews. He will be forever missed. Due to COVID restrictions a private graveside service will be held at Green Hills Memorial with a Celebration of Life planned for friends and family in the spring.

Stanley Crabtree, 84, passed away peacefully at home, early the morning of November 26th, 2020. Raised by Paul and Helen Blanton in Wilmington, CA. he graduated from Banning High School in 1954. He went right to work for American Can Company... View Obituary & Service Information

The family of Stanley Crabtree created this Life Tributes page to make it easy to share your memories.

Stanley Crabtree, 84, passed away peacefully at home, early the...

Send flowers to the Crabtree family.