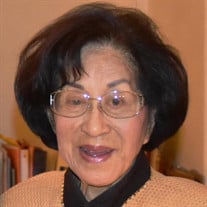 Suchada "Sue" Poh (Pusavat) was born in southern Thailand on June 8, 1931. Sue was the third child out of ten children. As a child she was saddened by the sickness and suffering that afflicted the people in her town. She dreamt of someday becoming a doctor so she could improve the quality of life for her countrymen. As a child, she was sent to learn Chinese at a Chinese language school in Penang Malaysia and later graduated from high school in Singapore from Malayan Union Seminary, where she also studied and learned English. The Pastor there recognized her potential and encouraged Sue to pursue pre medical studies in the USA at Pacific Union College in Northern California. Her continued passion for the sciences led her to earn her medical degree from Loma Linda University in Southern California (where less than 10% of her medical school graduating class were female). She then completed her internship at Glendale Adventist Hospital. With a small one year old son in tow she chose to do her Pediatric residency at Kern General Hospital (now Kern Medical Center) in Bakersfield, California because it had the "best call schedule" for her young family. After residency she was appointed Associate Director of Pediatrics at KMC and ultimately became the Director of Pediatrics. She was also Associate Clinical Professor of Pediatrics at UCLA. After 10 years at the teaching hospital she decided to pursue private practice in Bakersfield. Sue spent the next 35 years serving the local community treating and caring for infants, children, and adolescents. Many former patients trusted Dr. Poh so much that they brought their own children to her and another generation would be cared for. From the years 2001 to 2010 she was voted "Best Pediatrician" in a readers choice poll conducted by The Bakersfield Californian newspaper. In her rare spare time she enjoyed traveling, skiing and visiting with her extensive family and friends. Most important to her was her everlasting love she had for her family. Considered the matriarch, Sue was well regarded and respected in the Poh and Pusavat families where she always led with class and grace. During her years in Bakersfield she generously housed and cared for numerous (over a dozen) siblings, nephews, and nieces, many of whom came to the USA from Asia to pursue an education just like she did many years before. All the while treating them like her own children. Sue was known for her hospitality and hosted many holiday gatherings and celebrations throughout the years that became special family traditions. Love, laughter, fellowship and of course lots of food highlighted these welcoming events. After forty-five years of practice, Sue finally retired and made her way to Manhattan Beach, CA to be closer to her son, daughter in law and grandson. She enjoyed these treasured years nurturing and watching her grandson grow from a teenager to a young adult. Sue's love for God also remained strong from her early days till her passing. Never wanting to miss church service, she even adapted to the current pandemic by attending service via zoom. Our beloved Sue is survived by her husband Sian, her son Michael (Dianna), grandson Matthew, five sisters, numerous nephews and nieces along with cherished extended family. She will be remembered for the way she touched and inspired the countless people in her life. She leaves behind a legacy of love, strength and compassion that will live on in our hearts forever. Due to the ongoing health pandemic a memorial service to celebrate her life will be held when conditions allow. In lieu of flowers, donations can be made in Sue's memory to Loma Linda University Health at giving.LLUH.org/SuePoh

Suchada "Sue" Poh (Pusavat) was born in southern Thailand on June 8, 1931. Sue was the third child out of ten children. As a child she was saddened by the sickness and suffering that afflicted the people in her town. She dreamt of someday becoming... View Obituary & Service Information

In lieu of flowers, donations can be made in Sue's memory to Loma Linda University Health at giving.LLUH.org/SuePoh

Send flowers to the Poh family.