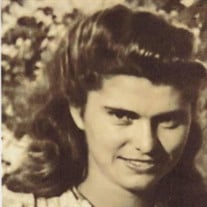 Life&#8217;s Journey... 1931 - 2021 Tereza Lovrovic was born on March 30th, 1931 to her parents Kata and Martin (Marko). She was born in the family home in the former Yugoslavia, now Croatia, on the beautiful island of Olib. Tereza was an... View Obituary & Service Information

The family of Tereza Stipicevich created this Life Tributes page to make it easy to share your memories.

Tereza Lovrovic was born on March...

Send flowers to the Stipicevich family.