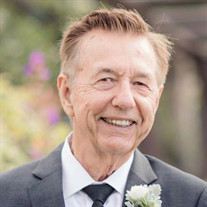 Terry Lee Wetkowski, age 79, of Palos Verdes Estates, California passed away on Wednesday, October 27, 2021, at home. He was born in Benton Harbor, Michigan to Albert Wetkowski and Evelyn Sullivan on December 12, 1941. He grew up in Sarasota, Florida with his father and step-mother, Eloise Messer, and his siblings. Terry graduated from Sarasota High School and went on to earn a Bachelor’s of Science degree in electrical engineering from the University of Florida in 1964. He moved to the West Coast for his first job, where he began his 45 year career as an aerospace engineer for various companies, including Boeing, Hughes, TRW, and Northrop Grumman. He retired from Northrop Grumman in 2010. He was a South Bay resident for over 50 years, living in Manhattan Beach, Hermosa Beach, and Palos Verdes Estates. He met his wife, Maryellen, in the summer of 1972, and they later married in Burbank, California in 1981. This year they celebrated their 40th wedding anniversary. Terry was a selflessly devoted husband, father, and grandfather, always ready and eager to offer a helping hand. He cherished his family and friends near and far. He had an insatiable curiosity that led to many varied interests and hobbies, including but certainly not limited to, flying, boating, water skiing, snow skiing, camping, backpacking, and cycling. He held his private pilot’s license and amateur radio license. He loved working with his hands and could fix anything. He was also an inventor with a patent to his credit. Terry is survived by his wife, Maryellen; his daughter, Melissa Wetkowski Porter (Thomas); his daughter Courtney Wann (Michael); and his granddaughters, Riley Wann and McKinley Porter. Services will be held at Green Hills Memorial Park, 27501 S. Western Avenue, Rancho Palos Verdes, California 90275, on Friday, November 19, 2021 at 2:00 p.m. In lieu of flowers, please make a donation in his honor to the American Kidney Fund (https://www.kidneyfund.org) or the Prostate Cancer Foundation (https://pcf.org).

Terry Lee Wetkowski, age 79, of Palos Verdes Estates, California passed away on Wednesday, October 27, 2021, at home. He was born in Benton Harbor, Michigan to Albert Wetkowski and Evelyn Sullivan on December 12, 1941. He grew up in Sarasota,... View Obituary & Service Information

The family of Terry Wetkowski created this Life Tributes page to make it easy to share your memories.

Send flowers to the Wetkowski family.