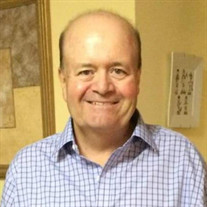 Thomas Douglas McCrory (Doug/Mac) passed away peacefully Saturday morning on February 26, 2022. Doug was 63 years old. Doug was many things to many people. To his family, he was an incredible brother, uncle, big-brother and a godfather. To his co-workers, he was a leader, an educator, a dedicated & ethical worker, who cared about you and your career. To his friends, he was a storyteller, a magician, and the best prankster ever! To all he was amazing, a hero and just THE BEST who was so loved. Doug had so many wonderful gifts including an incredible ability to help people succeed, feel good, and laugh. He always saw the best in everyone. His kindness and acts of generosity were endless while expecting nothing in return. His sense of humor was something he shared naturally with everyone. His stories would always leave you laughing with his endless escapades. He was Uncle Doug to every child he met. He loved spending time taking them to parks, firework shows, movies, teaching magic tricks, playing board games, helping with driving lessons, as well as millions of other activities. This was a role he played lovingly as it was so easy for him. Doug loved fried chicken, iced tea, game night, the Rolling Stones, practical jokes, Notre Dame football, Halloween, dancing, his friends and especially his family (not necessarily in that order). The only thing he didn’t like were vegetables. Doug never forgot his past. He treasured his childhood growing up in Elkridge, Maryland and the friendships of his youth that lasted a lifetime. He graduated from Howard High and attended Salisbury State College. He had many fond memories of going to GE Field and My Brothers Place (a local bar), and spending summers in Ocean City. After finishing college, Doug held several jobs including two years with Black & Decker. In 1985, while working at a health club, he met his great friend Fasha Mahjoor while selling him a membership. That was the start of a lifelong friendship. Fasha convinced him to join his new startup science company, Phenomenex, working in the field of Chromatography. This was the birth of Doug’s remarkable 32-year business career leading at Phenomenex as Vice President of Sales. He was at his best when teaching and guiding his colleagues, his creative imagination and ideas were endless when helping his coworkers become better, more successful and achieve higher goals in life. His creativity, commitment, wit, work ethic, loyalty and perseverance were a living example for everyone. In 2020 Doug started a new position as Director of Sales at Neoteryx involved in micro-sampling of blood. Once again, Doug started leading, guiding, and educating the team to great success. He was extremely happy about the future prospect of the next phase of his career. Unfortunately, his life was cut short to witness his future achievements. Doug is survived by his two sisters, Bonnie Reddish, Francis Pasowicz. And brother William (Lynn) and his “other” brother Bill Balter (Roxanna). He is also survived by his many nieces, nephews, Godchildren, and friends. Doug was preceded in death by his parents Mr. and Mrs. William and Peggy McCrory (nee Nicholson) and brother in laws Wendell Reddish, Walter Pasowicz. Even though Doug was taken too soon, he lived an extraordinary life surrounded by people who loved and adored him. In Lieu of flowers, Doug’s wishes are for you to reach out to an old friend or a family member, which you have not contacted for a while and meet for tea, coffee or lunch. Re-connect and enjoy their company.

Thomas Douglas McCrory (Doug/Mac) passed away peacefully Saturday morning on February 26, 2022. Doug was 63 years old. Doug was many things to many people. To his family, he was an incredible brother, uncle, big-brother and a godfather. To... View Obituary & Service Information

The family of Thomas Douglas McCrory created this Life Tributes page to make it easy to share your memories.

Send flowers to the McCrory family.