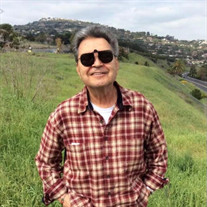 It is with great sadness that the family of Thomas Mladinich announces his passing on July 8, 2021. Tom’s life journey began in 1942 in New York City. His mother, Josephine, was born in Pennsylvania to Croatian immigrants. His father, Drago, was an immigrant from the former Yugoslavia, present day Croatia. Soon after Tom’s birth, the family welcomed another son, Philip, and a daughter, Karen. The two brothers and their younger sister spent a happy childhood in a working class neighborhood in Manhattan, New York. Tom finished grammar school, middle and high school in New York City. His childhood and formative years were greatly influenced by his parents’ close bonds with their Croatian relations and friends. Tom always spoke fondly about his many visits to his Aunt Francis and Uncle Tom’s country estate in Upstate New York, along with his interactions with his cousin Diana. His early exposure to the Croatian culture cemented his love for the “old country”, especially for the region of Dalmatia. He was fortunate to have made many visits to Croatia throughout his life, which enabled him to meet his Croatian relatives, get to know the country well and perfect his fluency in Croatian. In 1960, Tom’s parents moved the family to California, in search of better opportunities and warmer weather. They settled in San Pedro, a Croatian enclave in Southern California, where the new chapter of life began for Tom. Tom was drafted into the US Army in 1964. He served at a US Army facility in Aberdeen Proving Ground in Maryland. Tom was involved with the Nike Anti-Aircraft Missile Defense System. The assignment required a high FBI clearance. Tom was honorably discharged from the Army in 1966. His experience in the Army enabled him to find employment with the US government, and continue working on the Nike Anti-Aircraft Air Defense System in Southern California. At the same time, he enrolled at California State University, Dominguez Hills, in pursuit of a degree in history. Tom always had a fascination with world history. He maintained a challenging schedule−working by night, and attending university classes by day. In 1973 Tom travelled to Croatia where he met his wife Milica. After a 1 ½ year courtship, they married in Zagreb in 1975. Tom and his young family moved to the US in 1977, settling in California. Tom worked for several companies in freight forwarding. After working in the corporate world for many years, Tom made a happy transition to working as a long-shoreman at the Port of Los Angeles. Thomas Mladinich was the proud father of Carla Ford, Diana Mladinich McMichael and Adriana Haskell, and father-in-law to Leith Ford Sr., Bret McMichael and James Haskell. He leaves behind his beautiful grandchildren: Leith Ford Jr., Joshua Ford, Brooklyn Haskell and Sienna Haskell. Tom was a life-long member of the Dalmatian-American Club of San Pedro. He was equally proud of the USA, his country of birth, and Croatia, his ancestral country. He enjoyed socializing with his Croatian brothers and sisters, partaking in traditional Croatian/Dalmatian cuisine of “cevapcici” and “janjetina”, followed by a cold glass of “bevanda”. He especially enjoyed a slice of a traditional apple strudel. Tom was known to be a good dancer. He would enthusiastically join in a traditional “kolo” dance and in singing Dalmatian songs. The city of Split, his father’s birthplace, was his favorite place in the world. Tom was diagnosed with dementia in 2012. Throughout his struggle with dementia, he was cared for at home by his loving wife. For as long he was able, Tom expressed his joy for life, love of family and friends and gratitude. The funeral service is scheduled for Thursday, July 15, 2021, at 11:00 am at Green Hills Memorial Park in Rancho Palos Verdes. After the funeral service and interment, refreshments will be provided at the Mladinich residence. In lieu of flowers, the family requests those who wish to consider making a donation to Alzheimer’s Association, or any other charitable organization associated with Alzheimer’s research.

It is with great sadness that the family of Thomas Mladinich announces his passing on July 8, 2021. Tom&#8217;s life journey began in 1942 in New York City. His mother, Josephine, was born in Pennsylvania to Croatian immigrants. His father,... View Obituary & Service Information

The family of Thomas C. Mladinich created this Life Tributes page to make it easy to share your memories.

It is with great sadness that the family of Thomas Mladinich...

Send flowers to the Mladinich family.