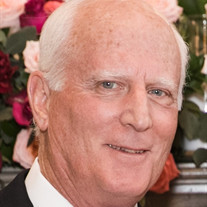 Thomas Michael Poyer | January 15, 1947 - May 3, 2022 Tom passed away in his Long Beach home after a year-long battle with bone cancer. At his side throughout his journey, was Margie, his loving wife of 45 years; their children, Jennifer and... View Obituary & Service Information

The family of Thomas Michael Poyer created this Life Tributes page to make it easy to share your memories.

Send flowers to the Poyer family.