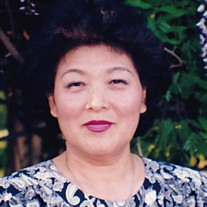 Toshiko Takada, 87, of La Mirada / Carson, passed away peacefully on December 19th, 2021, in her daughter’s home in Laguna Niguel. Toshiko was born on January 4th, 1934 to Rokuro Magami and Harue Nishiyama in Tokyo, Japan. Having survived the hardships of WWII as a young girl, she developed a resilience that lasted a lifetime. After completing her education, Toshiko met Takashi Takada at a music hall where he was performing with his Hawaiian Band. It was love at first sight. They wed soon after Takashi graduated from college, and had three children; Masayuki, Madoka, and Kaori. She became a dedicated home-maker and supported her entrepreneurial husband. Toshiko immigrated to the United States in 1977 with her children, when Takashi decided to start a printing company of his own in Los Angeles. Among the many ways she fulfilled her role, she enjoyed accompanying Takashi on frequent golf “settai” and became quite accomplished as a golfer herself. She was also well known for her cooking skills. The family hosted many gatherings and celebrations with friends, business acquaintances, and members of their church. Later, she picked up many hobbies including Japanese calligraphy, mahjong, and hula dancing. What she enjoyed the most was gardening. She masterfully grew many flowers, herbs, vegetables and fruit. Proudly, she credited her mother, Harue, for her green thumb. She was also a nurturing grandmother, especially to Justin Ryo and Julia Konomi as they resided with her during their formative years. Always putting others’ needs before her own, she generously gave whatever she could to all the people in her life. She welcomed everyone with warmth and kindness. Her sense of humor put everyone at ease with her unique “shitamachikko” or downtown sensibilities. Toshiko and Takashi received Christ over four decades ago. She was a devout Christian and in her later years she enjoyed providing her flower arrangements to the church, and cherished the many relationships she created within the congregation. Toshiko was predeceased by her husband Takashi Takada. She is survived by her children; Masayuki, Madoka and Kaori, their spouses; Sayumi, Karl, and Jake, and grandchildren; Justin, Julia, Sana, Naoki, Joel, and Dean. We will miss her greatly. Funeral and burial site services will be held at Green Hills Memorial Park, beginning in the chapel at 2pm on December 29th, 2021. Due to the pandemic there will be no gathering afterwards. In lieu of flowers, please send donations to Gospel Ventures International Church: 17811 S. Western Ave, Gardena, CA 90248.

Toshiko Takada, 87, of La Mirada / Carson, passed away peacefully on December 19th, 2021, in her daughter&#8217;s home in Laguna Niguel. Toshiko was born on January 4th, 1934 to Rokuro Magami and Harue Nishiyama in Tokyo, Japan. Having survived... View Obituary & Service Information

Send flowers to the Takada family.