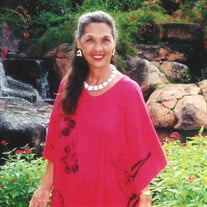 Trinidad de los Reyes Brown of Culver City, California passed away at Cedars Saini Hospital Marina del Rey on January 16, 2022 at 2340 hours of heart failure. Trinidad was born in Manila in 1938 as a United States citizen and was brought to the east coast of the United States by her mother in her first year of life to avoid the advancing Japanese army. The family moved to Northern California in the mid 1940’s and lived and labored among the vast migrating workforce of that era and during that period joined the Church of Jesus Christ of Latter Day Saints. By the 1950’s she was in the Bakersfield area fostered to the kind and generous Jung family then reunited with her mother and came to the San Pedro area when she worked for Starkist Tuna Co.. She there met and married Alfredo Barona Garcia and bore their six children Alfredo, Daniel, Veronica, Christopher, Edward, and Gary in eight years. During the next period in her life she used her diverse talents, determination, and foresight to obtain a high school diploma at Venice high school while working for Mattel, Darcy Electronics, and others while simultaneously raising her family. By the late 1970’s she parlayed her acquired skill sets to enter the Aero Space conglomeration of companies as a private contractor and gained her Associate Bachelor degree at Santa Monica College in 1998 just prior to her suffering and surviving a sub arachnoid aneurysm with the associated debilitating dementia that defined her for the next 23 years. Trinidad's talents included sewing, painting, household DIY, cooking, writing and overcoming any obstacle a computer might throw at her. She loved to dance, plan parties and then enjoy her creations. She raised her children on the Church of Latter Day Saints values. But no matter what stage in life, nor what in venue she was immersed, she maintained her spot on, wicked, sometimes profane, sense of humor She leaves behind her six children, nine grandchildren, six great grandchildren and her bereft companion of many, many years.

Trinidad de los Reyes Brown of Culver City, California passed away at Cedars Saini Hospital Marina del Rey on January 16, 2022 at 2340 hours of heart failure. Trinidad was born in Manila in 1938 as a United States citizen and was brought to... View Obituary & Service Information

The family of Trinidad Brown created this Life Tributes page to make it easy to share your memories.

Send flowers to the Brown family.