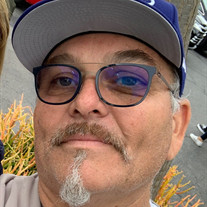 We have gathered to celebrate the life of Walter (Eddie) Greenwood, beloved brother, husband, father, grandfather, and dear friend. Eddie passed away on December 22, 2020 with his wife Melissa, and youngest daughter by his side. Eddie, known as Eddie G. had a passion for vintage culture and enjoyed going to custom car shows. He absolutely loved mariachi music, The Dodgers, Oldies, and hot-rods. Eddie was naturally bilingual, surprising many with how well he spoke fluent Spanish. Walter Eddie Greenwood was born on November 11, 1959, and raised in Wilmington, California to parents Walter and Teresa Greenwood. He is an older brother to two, Michael & Harvey. In 1977, Eddie graduated from Banning High School and entered directly into the U.S. Army. Upon completion of his military Service, Eddie followed the footsteps of his father to begin a 42 year career working in the Maritime Industry. From Casual to Longshoreman, Eddie G. proudly ended his career as a Marine Clerk. A passionate entrepreneur and businessman, Eddie always looked to engage with his people and community. Through the years he actively hosted classic car shows and helped his family and friends with any project they decided to pursue. Eddie was also the proud founder of Crown Sunglasses, serving the classics and custom car community for over 20 years. In 1989, Eddie married his wife and life partner, Melissa. They have been happily married for over 32 years. Together, Eddie and Melissa have five children. Eddie is survived by his wife, and children Jaz’min, Joshua, Destiny, Tori, and Quincy, and two grandchildren, Mila & Ezekiel. His legacy will also continue through his brother Michael and wife Mona, their children Meagan and Mandie, and his younger brother Harvey and his wife Brigette. Eddie Greenwood will forever be remembered by all the people he has impacted and for all the lives he has touched. He will be greatly missed.

We have gathered to celebrate the life of Walter (Eddie) Greenwood, beloved brother, husband, father, grandfather, and dear friend. Eddie passed away on December 22, 2020 with his wife Melissa, and youngest daughter by his side. Eddie, known... View Obituary & Service Information

The family of Walter Eddie Greenwood created this Life Tributes page to make it easy to share your memories.

We have gathered to celebrate the life of Walter (Eddie) Greenwood,...

Send flowers to the Greenwood family.