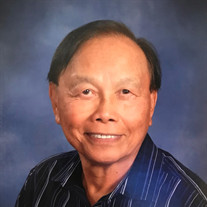 Wilfredo (“Fred”) Untalan of Torrance, California passed away on Saturday, July 17, 2021 at the age of 86. Wilfredo was born 1935 in Bolinao, Philippines Islands (PI) to Andres and Rebecca Untalan. He was the third-born of 8 siblings and graduated from Dagupan City Memorial College (high school in the PI) where he met his future wife, Erlinda Oviedo, whom he married in 1964. He also attended FEATI University and joined their Air Force ROTC. Growing up in the beach town of Bolinao, Wilfredo learned how to fish from his grandfather. His love of fishing extended into many memorable chartered fishing trips on the Pacific Ocean with his grandchildren. Rarely was Wilfredo sitting still — he enjoyed doing many hands-on projects and working in his garden. Erlinda and Wilfredo were the first in their families to immigrate to the United States in 1972. They had children at the time, and it broke their hearts to leave them behind with their grandparents until they could establish themselves in this new land. With not much money in their pockets, they stayed with distant relatives, the Caampueds, while working tirelessly to save up. Their hard work paid off because after a year, they were able to purchase a modest house in Torrance, California, which is still their home to this day. After obtaining their U.S. citizenship a few years later, Erlinda and Wilfredo worked on bringing their children to the U.S., to afford them an abundance of opportunities, given the same resolute and determination they both had. They had 4 children and 13 grandchildren, whom Wilfredo loved fiercely and endearingly referred to as “my beloveds.” His grandchildren especially enjoyed his big personality and funny anecdotes. Wilfredo worked as a steam engineer for a Goodyear plant and then worked at Kaiser Permanente Hospital until his retirement. Wilfredo is survived by his wife Erlinda Untalan, whom he lovingly adored and took care of when she took ill last year. He is also survived by four siblings, Benton, Rogelio, Andres Jr. Untalan and Lillian Camba, and is preceded in death by his parents and siblings, German, Flordeliza and Eden Untalan. He leaves behind his children who are grateful and filled with love for their father: Willen, Mirta Linda Engel (John), Wilfredo Jr. (Maribel), and Erwil (Elizabeth). And, finally, he leaves behind 13 grandchildren, in birth order, who will miss their grandfather’s kisses, hugs and funny quips: Lauren, Sean McElmurry, John Engel II, Benjamin Engel, Cameron, Jacob Engel, Kalyssa, Samuel Engel, Kyla, Madeleine, Sydney, Joseph Nicholas and Meredith. Friends and family are invited at a viewing on Sunday, August 1, 5:00 - 8:30 pm at Green Hills Memorial Park, 27501 S. Western Ave., Rancho Palos Verdes. A funeral service will be held on Monday, August 2, 10am at First United Methodist Church, El Prado, Torrance.

Wilfredo (&#8220;Fred&#8221;) Untalan of Torrance, California passed away on Saturday, July 17, 2021 at the age of 86. Wilfredo was born 1935 in Bolinao, Philippines Islands (PI) to Andres and Rebecca Untalan. He was the third-born of 8 siblings... View Obituary & Service Information

The family of Wilfredo C. Untalan created this Life Tributes page to make it easy to share your memories.

Send flowers to the Untalan family.