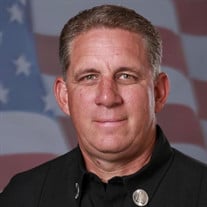 William “Bill” Robert James of San Pedro, California, passed away on December 11, 2021, of cancer. Beloved and respected by all who knew him, Bill was surrounded by his immediate family and a hospital lobby full of family, friends, and fellow firefighters. Bill was 52 years old. Born on May 19, 1969, to Daniel and Mary Lou James, Bill graduated in 1987 from Miraleste High School in Rancho Palos Verdes where he excelled at football. Bill graduated from the University of Oklahoma in 1992 with a degree in Business Administration. While Bill lived a full and active life in California, part of his heart remained in Oklahoma with his beloved Sooners and where he enthusiastically attended every football game possible, where many of his family and friends reside, and where his father is interred. Bill is also a proud member of the Choctaw Nation of Oklahoma. True to his love of the ocean, Bill spent many years working at Catalina Express, first as a Deckhand, then Deckhand Supervisor, and finally as Captain. It was here, inspired by the Island of Romance, that he met Lisa Seelig. They were married on April 20, 1996, but every time someone asked, Bill would joke that they were married for 50 years. Bill had a 21-year career with the Los Angeles City Fire Department (LAFD) where he achieved ranks of Firefighter, Engineer, and was promoted to Captain in 2017. Bill was most proud of his family. A devoted and involved father, he and Lisa have raised two wonderful people who are spreading their wings. Mia followed in her father’s footsteps and recently graduated from the University of Oklahoma and just landed her first “real” job as an Assistant Escrow Officer. Joe is in his third year at George Fox University where he plays football and baseball and is majoring in Business Management. Bill cherished and cultivated relationships with his large family in Oklahoma and California and was actively involved in every gathering, party, game, sporting event, and laugh. He was usually the one helping organize or energize an event. At the LAFD, he was affectionately known as “Wild Bill” for his zest for life. Bill loved playing sports of any kind, but particularly mountain bike riding, running, and anything to do with the ocean such as boating, surfing, bodysurfing, and paddle boarding. While competitive, Bill was more about the fun and participation than winning. He was quick of wit, loved joking around, and had a laugh and smile as big as his stature but a humility and grace that endeared him to all. He will be remembered for his generous and giving spirit and as the even-keeled, good natured, unflappable, fun-loving pillar of the family. In addition to Lisa, Mia and Joe, Bill is mourned by countless colleagues, the states of Oklahoma and California, the Choctaw Nation, his large extended family, his brother Mark, sister-in-law Patty, and Niece Rebecca, and his two dogs, Lincoln and Sadie. Bill will be sorely missed. A memorial service will be hosted on December 29, 2021, at 9:00 AM at Holy Trinity Catholic Church in San Pedro. After mass, he will be laid to rest at the Green Hills Memorial Park with a reception at Brouweij West. Donations can be made in his honor to the Los Angeles Firemen’s Relief Association, Widows, Orphans & Disabled Firefighter’s Fund (https://www.lafra.org/widows-orphans/)

William &#8220;Bill&#8221; Robert James of San Pedro, California, passed away on December 11, 2021, of cancer. Beloved and respected by all who knew him, Bill was surrounded by his immediate family and a hospital lobby full of family, friends,... View Obituary & Service Information

Donations can be made in his honor to the Los Angeles Firemen’s Relief Association, Widows, Orphans & Disabled Firefighter’s Fund

Send flowers to the James family.