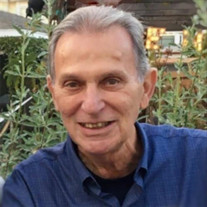 August 27, 1944 - April 8, 2022 William Joseph Urso died at home in the arms of his loving wife Barbara, who he had been married to for nearly 43 years, and surrounded by his four children, Nicole (Jeremy), William (Lorena), Sam (Jenna), and Kate (Andrew). He was 77. Bill was the beloved patriarch of the Urso family and adored by his 10 grandchildren who called him Pap. In his final days, he happily learned that another grandbaby was on the way. One of four children, Bill was born to Samuel and Kathryn Urso in Pittsburgh, PA, part of a large Italian-American family that loved the Steelers and getting together for cards and Sunday supper. His older brother John died in 2016, and he is survived by sisters Linda Cline and Kathy Urso. Setting roots in San Pedro, Bill built a successful business and earned a well-known name as a general contractor. He was an active member of the community and Holy Trinity Church, where his children attended, and many of his grandchildren attend school. His sons continue his legacy. Will started Urso Air Systems, the top South Bay HVAC company, where Sam is general manager and Barbara is office manager. Bill's family and friends miss him dearly, his strength, humor and love, and will forever cherish the many years of wonderful memories and many words of wisdom he left with them. A viewing will be held at Green Hills Memorial Chapel on Tuesday, April 26, 4:30-8:30 p.m. Rosary at 7:30 p.m. Funeral mass will be held at Holy Trinity Catholic Church on Wednesday, April 27 at 11:30 a.m. with burial to follow. Green Hills Memorial Chapel 27501 S Western Ave. Rancho Palos Verdes, CA 90275

August 27, 1944 - April 8, 2022 William Joseph Urso died at home in the arms of his loving wife Barbara, who he had been married to for nearly 43 years, and surrounded by his four children, Nicole (Jeremy), William (Lorena), Sam (Jenna), and... View Obituary & Service Information

The family of William Joseph Urso created this Life Tributes page to make it easy to share your memories.

Send flowers to the Urso family.